Art in the Bathroom

This post about art in the bathroom is the first in a series featuring specific rooms in the house. How do we select work for a specific room? What are the different approaches to decorating a room? What do you have in your bathroom?
If not answered, these questions are at least discussed below.

A very wise lady once said to me that one should ‘Frame the artwork, never the room’.  Framing an artwork specifically to blend in with general decor is rarely as successful as focusing on the artwork in isolation. Some artists create artwork and framing choices that are designed to stay together. James McNeill Whistler, for example, designed and painted his butterfly signature on frames specially for his paintings (The University of Glasgow have some info on Whistler’s framing of his Nocturne: Blue and Silver – Chelsea). Contemporary artist Mark Hearld paints his frames to create the whole finished object. The approach being, once the object looks good, it will shine in any setting.

Choosing artworks for a home, and indeed, a specific room within a home, is a delicate business. I happen to know one individual who has chosen an artwork based on its subject, specifically for their airing cupboard. A little treat every time they get out a fresh towel. There are some well-known artists from the past, who went one step further than choosing artworks for specific rooms. When Eric Ravilious (1903 – 1942), Tirzah Garwood (1908 – 1951), Edward Bawden (1903 – 1989) and Charlotte Bawden took up a countryside residence in Great Bardfield, they decorated everything using linocutting to create patterns for wallpaper, and marbled paper for lampshades. Revilious, with both Bawden and Garwood, worked on mural artworks for tea rooms and refectories – art to aid digestion or to increase consumption? They also worked on a private commission for a music room, decorating some door panels with tennis scenes, now with the City of Bristol Museum and Art Galley. 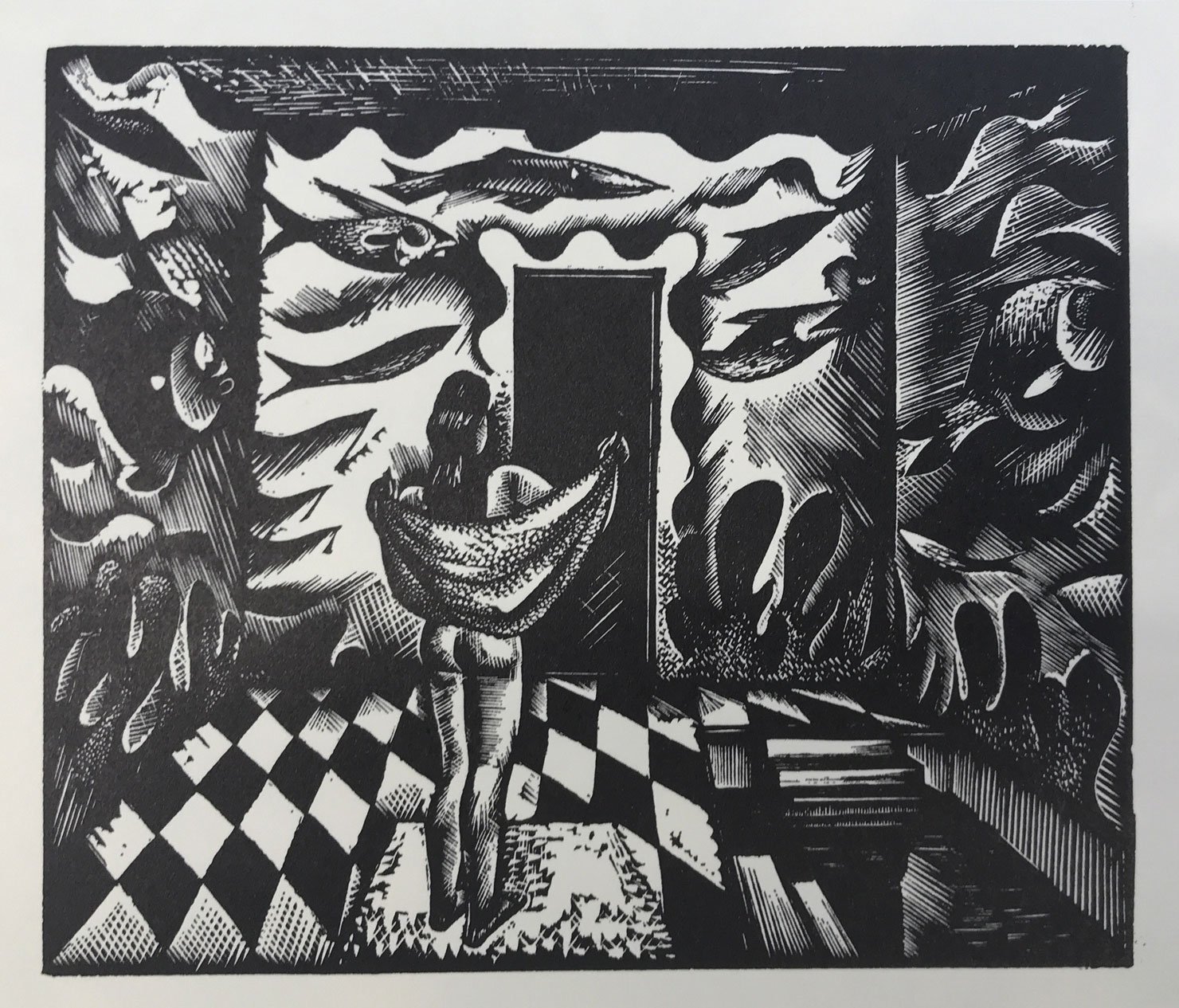 Bathroom, 1926. A wood engraving by Eric Ravilious where the bathroom seems to taking on a submarine life of its own.

When Vanessa Bell (1879 – 1961) and Duncan Grant (1885 – 1978) moved to Charlston in 1916, they painted not just paintings, and not just walls, but pretty much everything in sight. Sir John Soane (1753 – 1837) had so many pictures that he designed magic ‘picture planes’ allowing him to layer his displayed pictures three deep in one room. Which I suppose counts as ‘framing the room to suit the pictures’.

A couple of months ago, we asked our newsletter subscribers what they had on the walls and ledges of their bathrooms. The bathroom (and toilet if separate) is sometimes a neglected space. This was not the case for some of our readers, but it certainly was for us and we’ll start off with our bathroom selections. 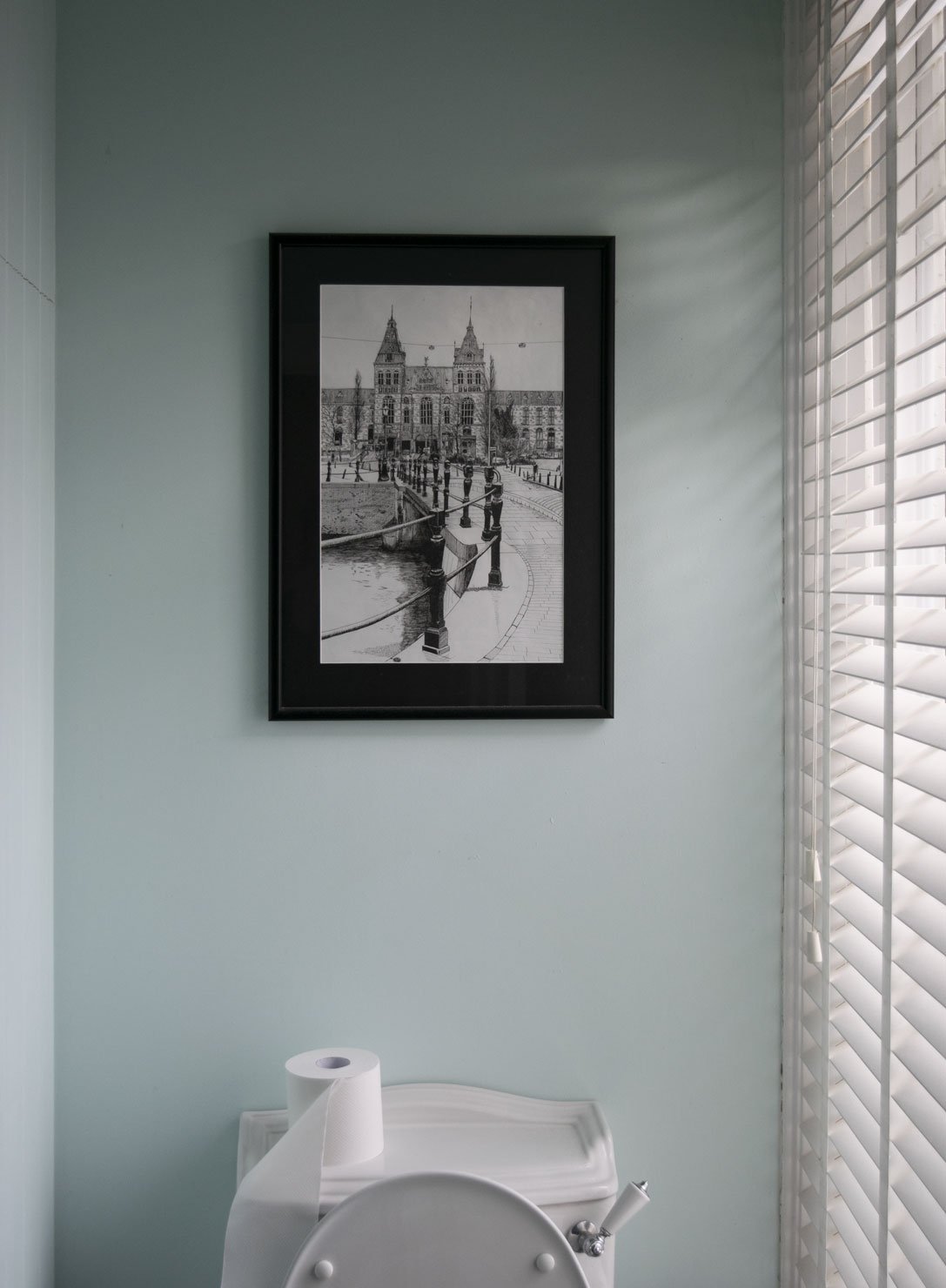 The last remaining remnant of my A-Level artwork. A pen & ink of the central railway station in Amsterdam. They took us on a school trip – it was messy! 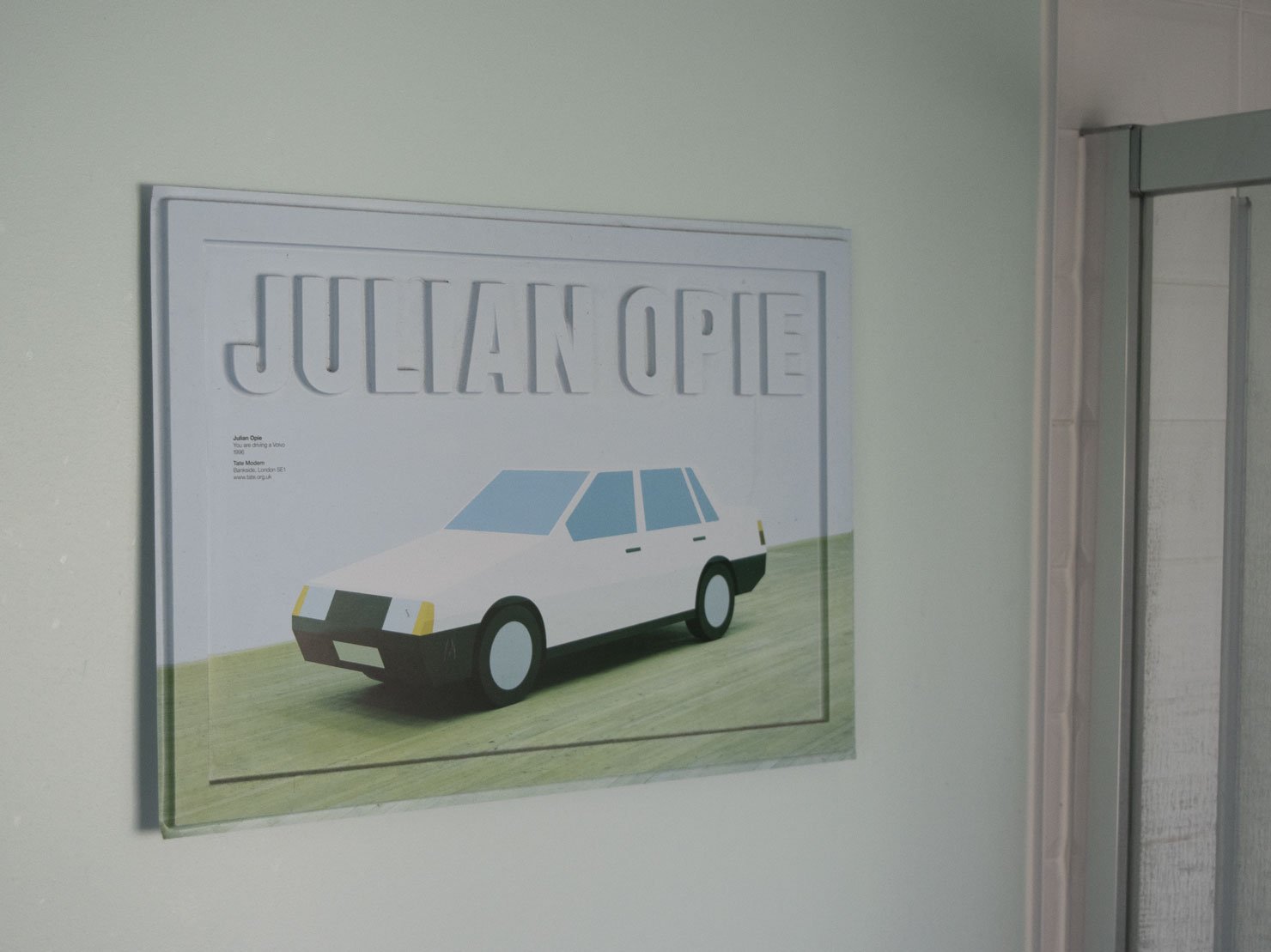 A moulded plastic Julian Opie “You’re driving a Volvo”, Tate Modern Tat, purchased from the Oxfam bookshop in Sheffield. Hung on a spare nail the day we moved in, now faded and wonky.

Since we began discussing the topic, we added a third item to our bathroom … this Julian Dyson sculpture. 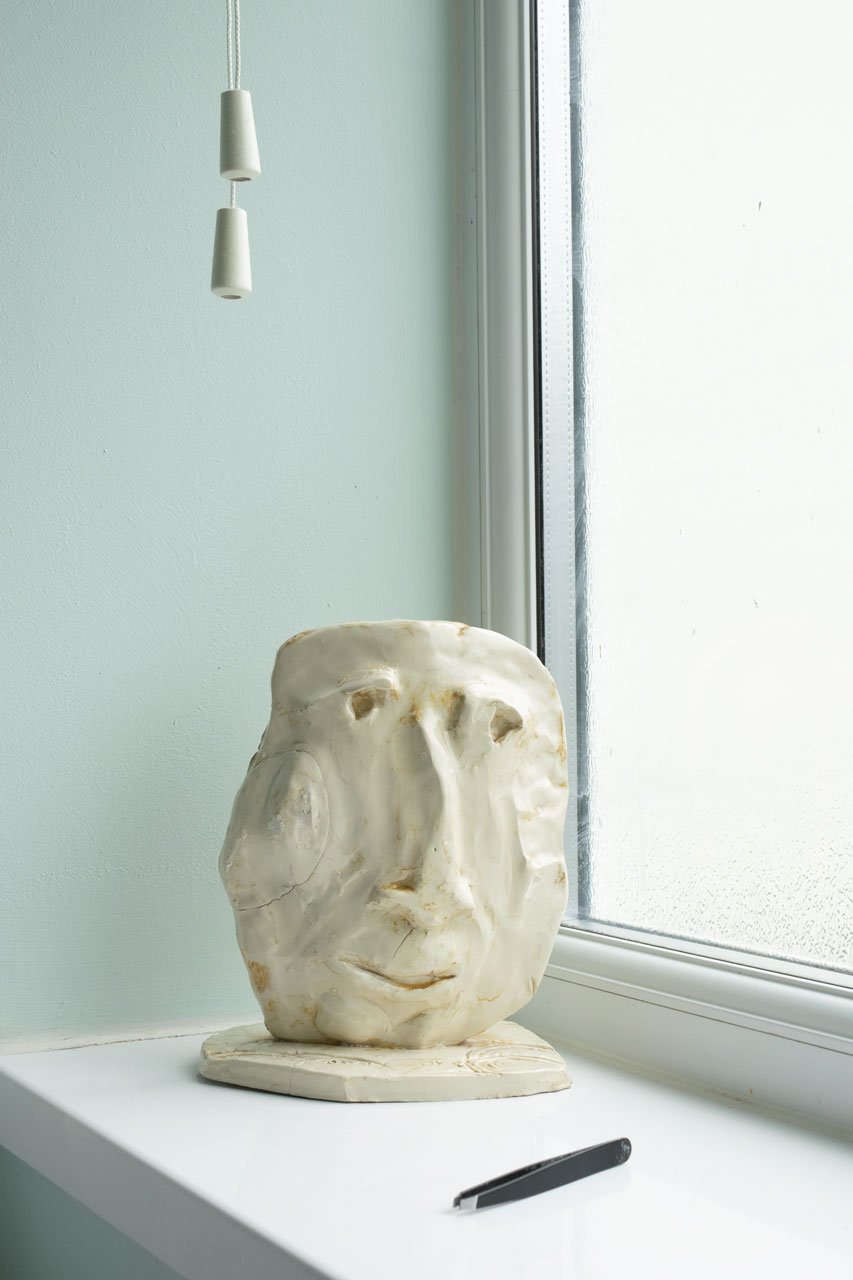 No matter how rough I look in the morning, this fellow always makes me feel better.

The bathroom is perhaps a strange space when thinking about art. It is part public, part private. It is designed for ablution and excretion. Not exactly the first choice of space for hanging artworks. Anecdotally, the bathroom and perhaps, specifically a separate toilet, is the place to hang or display unwanted gifts. It has been seen as a space that can mock or belittle anything displayed there.

This reminds me of a little story about the mid-century Cornish artists of St. Ives. The story is hearsay and I cannot guarantee it is 100% accurate, but it’s a suitable anecdote for this blog post. Two of the most prominent artists of the Cornish set at the time, Barbara Hepworth (1903 – 1975) and Peter Lanyon (1918 – 1964), organised an exhibition of the groups’ work. Amongst the artists, was the modest and mild-mannered Robert Brennan (1925 – 2018). For whatever reason, Lanyon had not allowed enough space for Brennan’s work in the main exhibition and suggested it be hung in the toilet. I think it’s fair to assume that this was meant as an insult. We don’t know whether or not Brennan was annoyed or why he went along with this plan, but he was, pleasingly, the only person to sell any work on the opening night.  I like to imagine someone overwhelmed by the socialising of the private view, nipping off for a pee and a few moments of peace, sharing a moment of quiet connection with Robert Brennan’s art.

The bathroom is a place that is sometimes escaped to for a few moments of quiet or contemplation. Maybe a place to relax or a place to refresh. And this is borne out by some of the artwork we received from our newsletter subscribers.

From our small survey we can see that the bathroom provides the perfect space for those quirky items which are personal, from family members, or that tell a story to those who know it. It is not the Grand Salon of the house, and doesn’t need the showpieces that might fill such spaces. It is the relaxing aspects of the bathroom that mostly feature in the artworks. It seems here at Portland H.Q., we are the slackers, putting up what we had at the time, rather than selecting something special. Our report will be stamped with ‘could try harder’.

Things change thematically when you look at how the bathroom is portrayed within artworks or is the artwork. Out of many examples, we have selected a few to look at. There are famous paintings and drawings that take place in the setting of a bathroom. Degas’ pastel nudes, collectively known as ‘The Bathers’ which were exhibited in 1886, for example. These are women bathing without consideration, for the male gaze, but close up, personal, and without the makeup and costume of society. These bathroom spaces are quiet and unassuming.

Death of Marat (1793) by Jacques-Louis David shows the more dramatic side of bathroom art, by depicting Jean-Paul Marat, a French revolutionary stabbed to death in the bath. 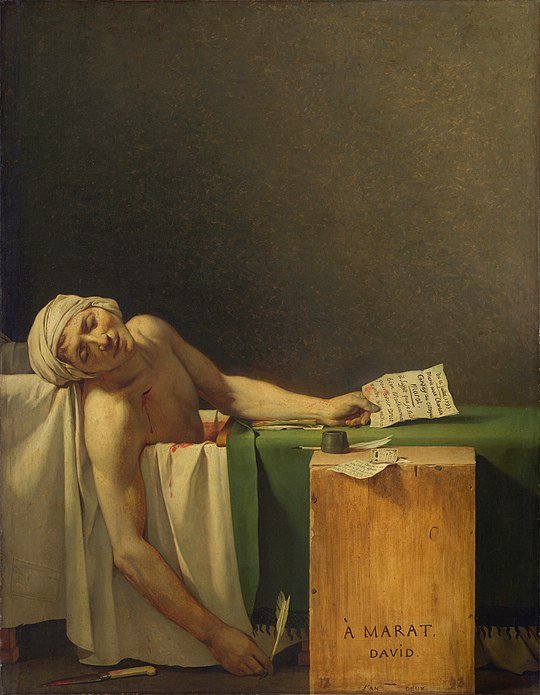 The Death of Marat, 1793, Jacques-Louis David. Royal Museums of Fine Arts of Belgium.

Of course, bathrooms were not always such private spaces. Those Romans knew a thing or two about bathing. At the Baths in Bath you can catch a glimpse of the grandeur of the occasion. Then, as now, bathroom decoration was made to stand up to the challenges of location and wear, which is why I am always drawn to a spot of mosaic art in the bathroom. Decorative, practical and lots of fun. Contemporary art though, often displays a more extreme response to the space and functions of the room. A politically motivated response to the bathroom can be found in the three dedicated bathrooms in Womanhouse (1972).

Womenhouse was a collaborative art installation created in California by Judy Chicago (b.1939) and Miriam Shapiro (1923 – 2015) with a cohort of students from the Feminist Art Program at California Institute of the Arts, Valencia. It was a house that represented women’s experiences by renovating and transforming an abandoned building.

The Lipstick Bathroom by Camille Grey was a bathroom where every fixture was painted bright, ‘Lipstick’ red. The room featured 200 plastic lipsticks, a fur-lined bathtub, and a female figure painted entirely in red. The Menstruation Bathroom by Judy Chicago was painted a stark white, with a layer of gauze covering the shelves. A single rubbish bin was overflowing with what appeared to be used tampons, a woman’s “hidden secret” that cannot be covered up. Finally, the Nightmare Bathroom by Robbin Schiff featured a bathtub containing a woman’s figure with most of her body obscured in water, made entirely from loose sand. These examples show the complex nature of personal vulnerability and the unspoken aspects of rooms we all frequent regularly.

Most functional bathrooms do not feature a fur-lined bath and are not primarily a comment on perceptions and realities of womanhood. However, there’s lots of poo and blood about the bathroom and it is generally hidden behind shiny facades. This is perhaps similar to the way we package and dress up our personal vulnerabilities for public presentation? Taking the unspoken one stage further was Italian artist Piero Manzoni (d. 1963) who produced an edition of tin cans each containing 30 grams of his own excrement. Not art? One was purchased by the Tate Gallery and is apparently, still in the collection.

A little more tongue-in-cheek were the photographs posted by Banksy on his instagram page during the covid lockdown. 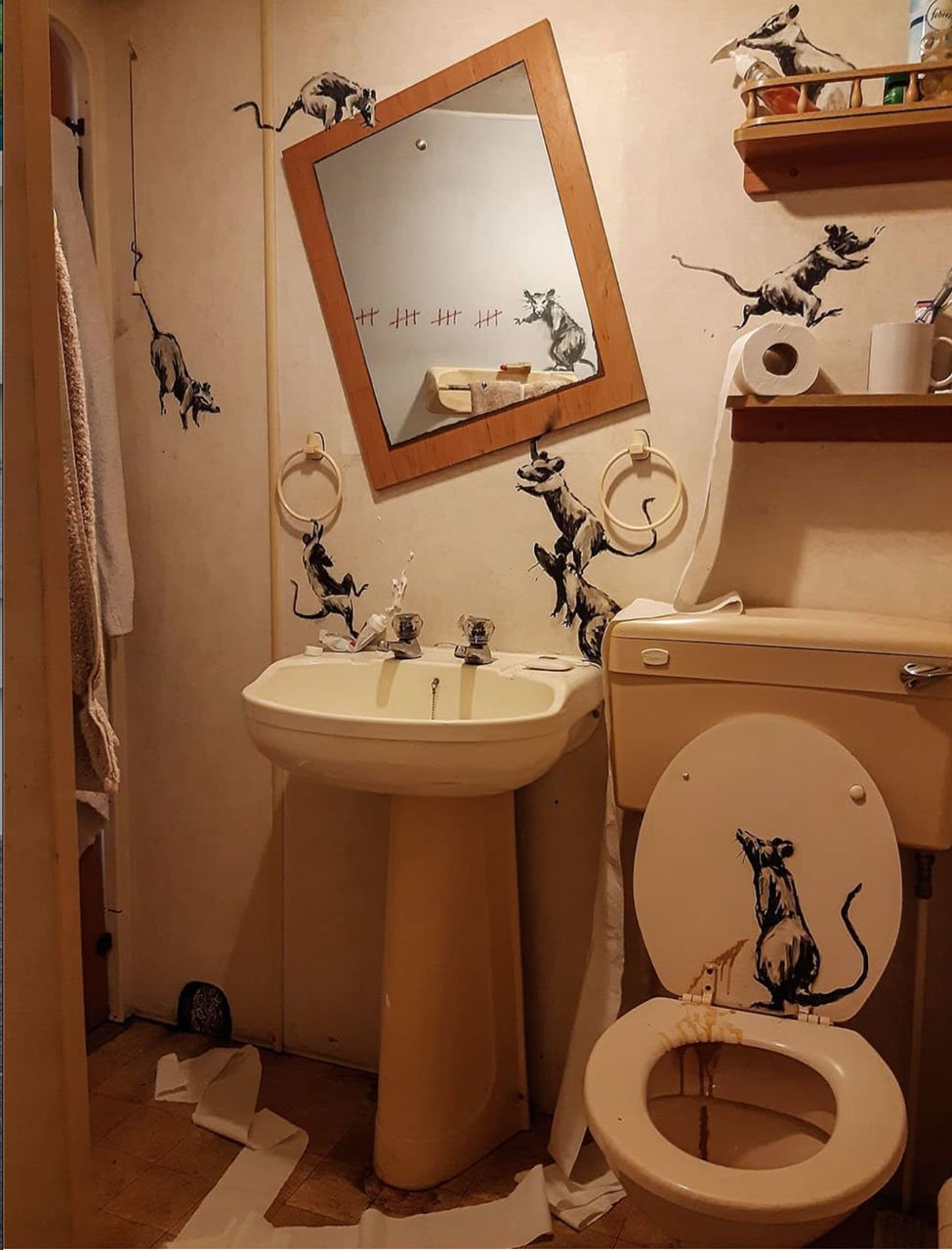 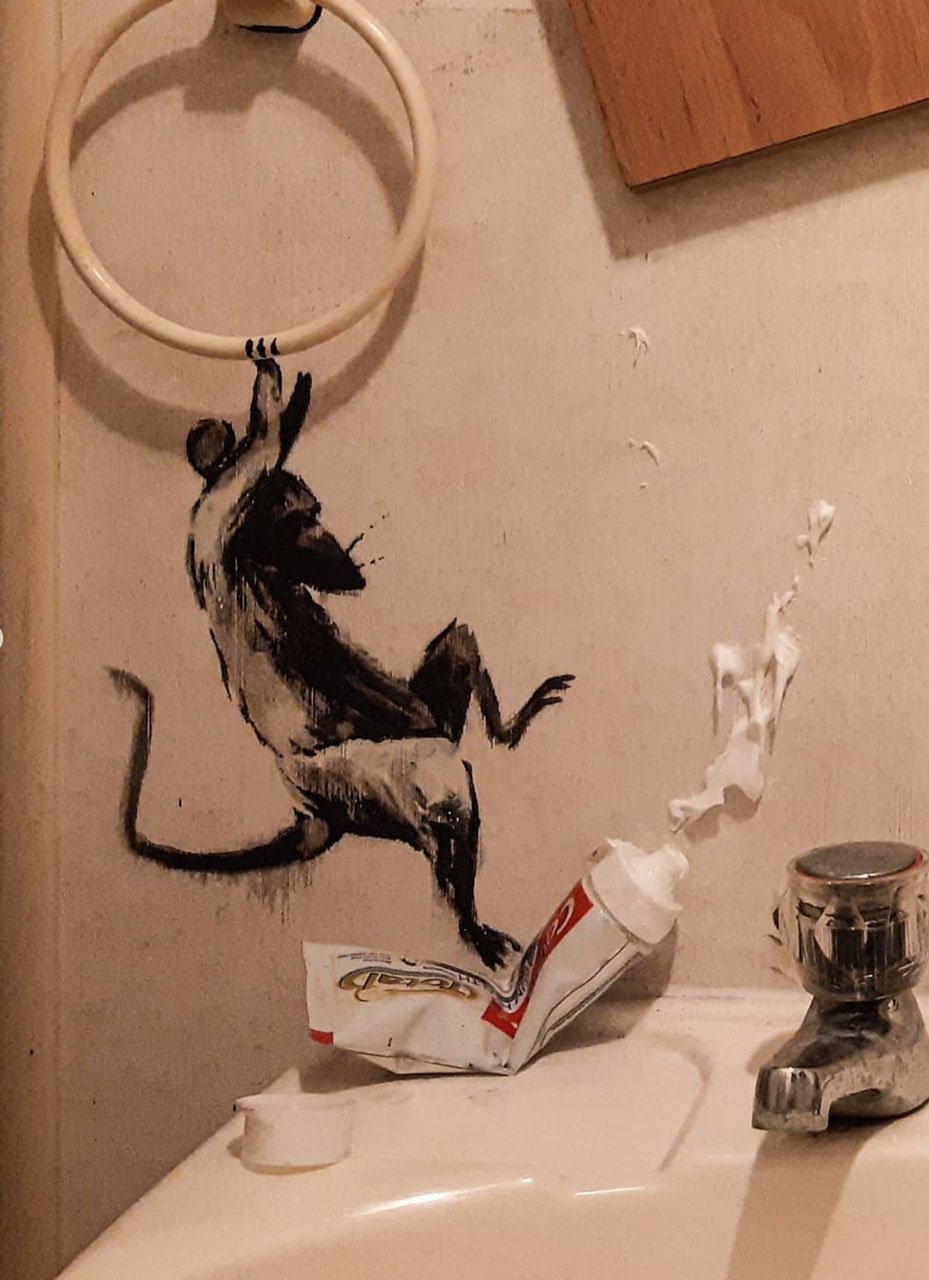 And of course, who could forget Marcel Duchamp’s re-purposed urinal as Fountain (1917), also in the Tate collection. And that reminds me that porcelain is another fabulous bathroom material. Sculptures will stand the test of time in the bathroom and perhaps it was this that prompted me to get our Dyson sculpture out on show.

Obviously there are some practical implications for art in bathrooms – the steamy conditions and fluctuating temperatures can be an issue. Should you put art on paper in the bathroom? Well our drawing of Amsterdam has survived for seven years or so without damage. It is near a window and has been framed well. So it really depends on the ventilation and temperature controls. I think it’s fair to say that anything goes.

Something Fishy at Billingsgate Market