Please note: This blog post includes images of a sexually explicit nature. Avert your eyes if you are likely to be offended.

In 1972, Arcadia Press published an edition of Femme/Hombres by French poet Paul Verlaine. Michael Ayrton illustrated this publication with a series of 15 etchings depicting Verlaine’s poetic and real-life preoccupations of sex and passion. Individual sets of these etchings were also produced and it is one of these sets of artist's proofs that are listed for sale in our online shop.

Selling artwork which has explicit sexual content creates its own quandaries. There are questions about access, about who may stumble across these images. But it’s also about context. What makes something art rather than erotica or pornography? Perhaps it’s not possible or necessary to distinguish so clearly where the lines are drawn. Sometimes it is a little of everything.

None the less, I will make the case for these prints. The series of etchings is biographical. It depicts the preoccupations of Verlaine as a poet writing in the late nineteenth century, about sex, indulgence and passions. They are illustrating poems that were autobiographical in nature, reflecting Verlaine's lived experience.

Paul Verlaine (1844 - 1896) was a French poet whose life and work embodied the energy of Fin de siècle. Verlaine was considered a symbolist poet, using themes of the unconscious and suggestion, and musical cadence within his poetry. He married Mathilde Mauté in 1870, but after receiving letters from a young Arthur Rimbaud, Verlaine invited him to Paris and they began a passionate and violent love affair. Rimbaud included several of his poems in his letters to Verlaine,  including "Le Dormeur du Val" (The Sleeper in the Valley), the subject of one of the etchings by Anthony Gross that we have on offer. Verlaine and Rimbaud spent time together in Paris, wild with drink and drugs, and eventually lived together in London. Theirs was a stormy relationship, ending with Verlaine shooting Rimbaud in 1873 (although not inflicting great damage). Verlaine taught in schools around England until returning to France in 1877. 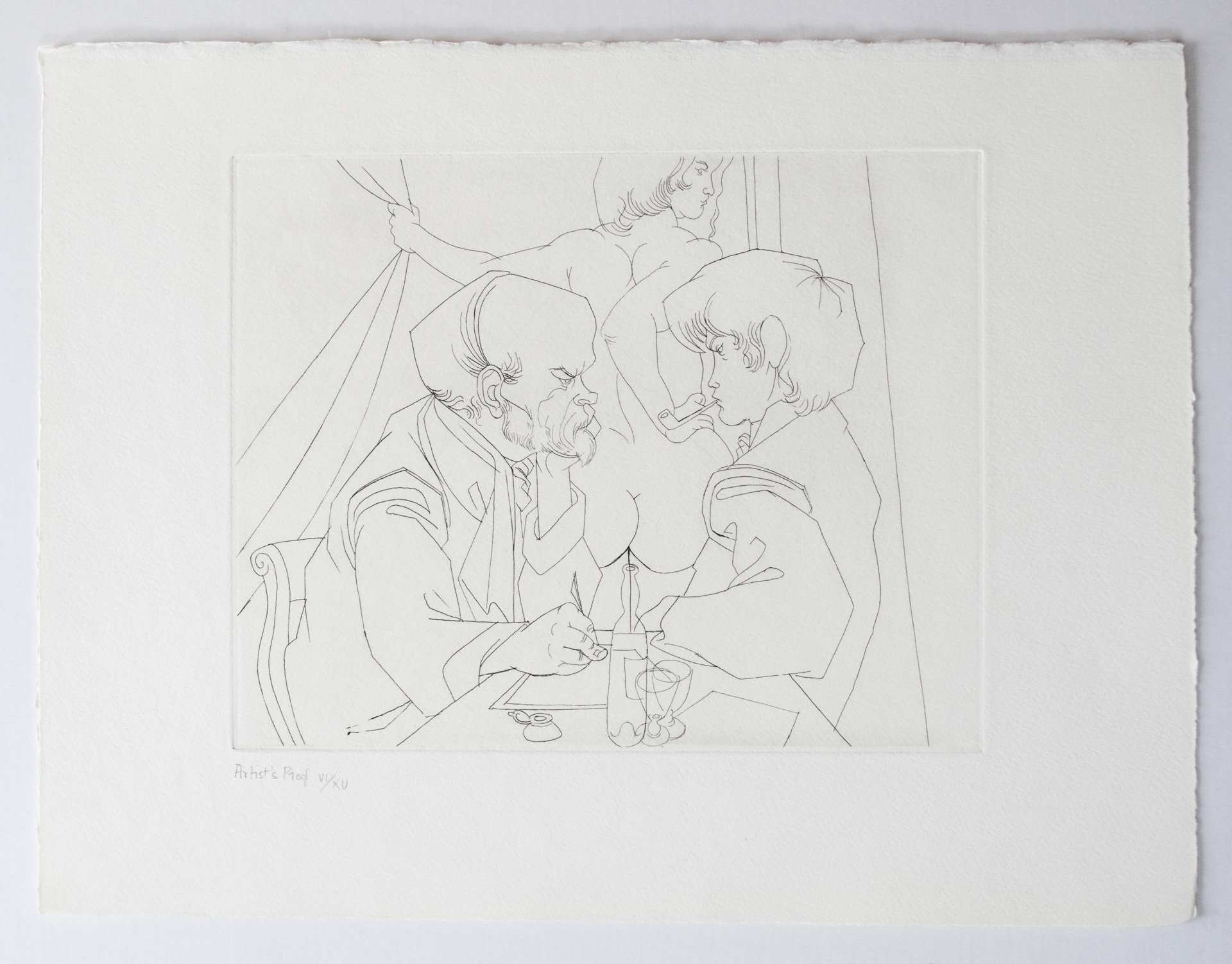 Ayrton’s etching do not glamorise Verlaine’s work. There are elements of discomfort in the images. Yes, the viewer is placed as voyeur as with a pornographic image, but this is not a viewing position of pleasure as far as the content is concerned. These are images of passion, prostitution, addiction and obsession. They are not produced as simple pleasures of the flesh. The increasingly characterised face of Verlaine is contorted sometimes in the strain of sex, but in some way reflective of the internal animalistic need that drove him to excess, and eventually, to his early death. There is mortality here and also a little of the absurd. The suckling, and peering, and straining are rendered a little ridiculous, and as such so is the act of congress. In Ayrton’s etching’s, the figure of Verlaine becomes grotesque through his own excess. 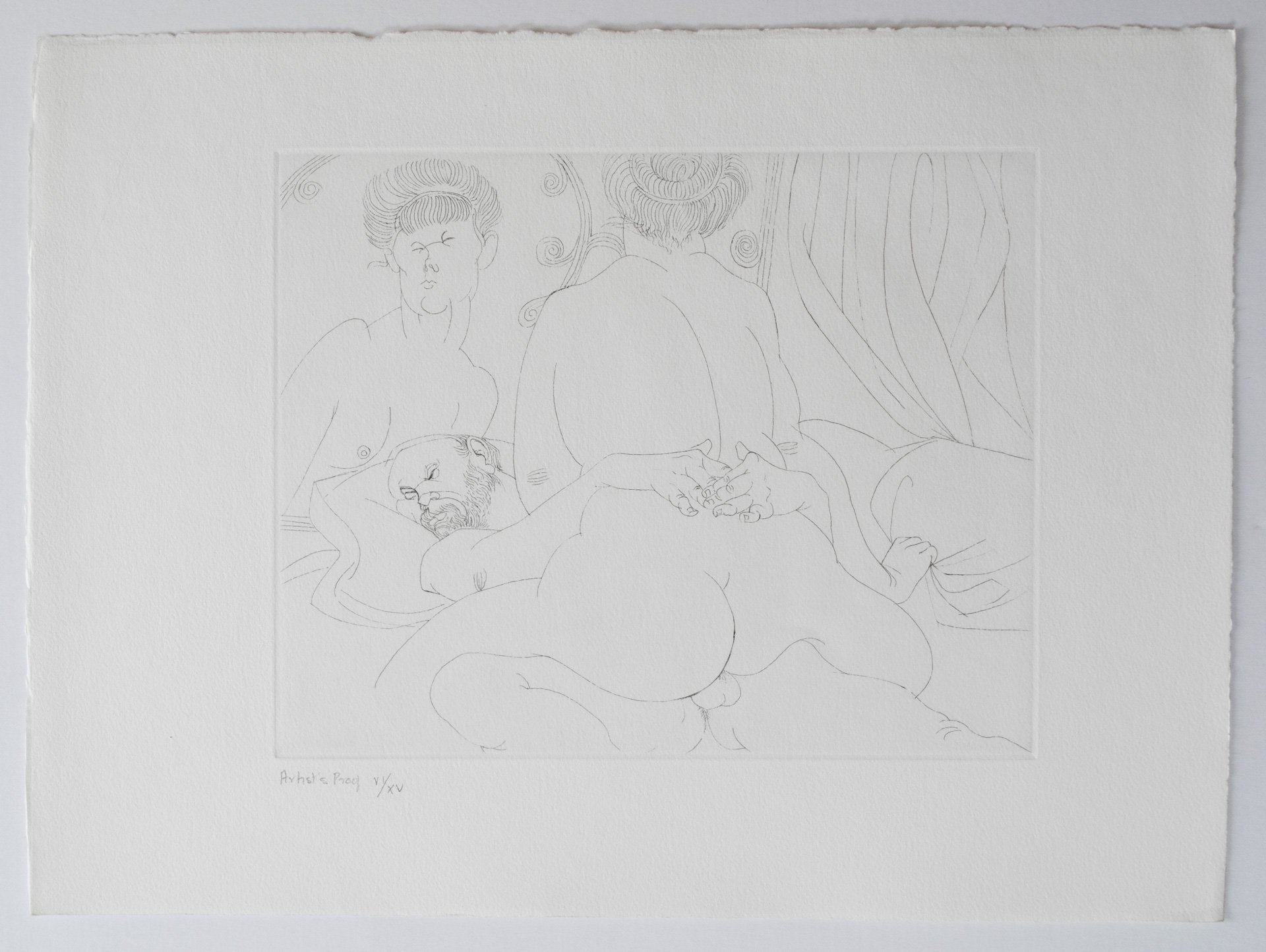 Some of the straining expressions remind me of the self-portraits by Egon Schiele (1890 - 1918) where he paints himself in the act of self pleasuring, his body contorted as an expression of his inner torment. His paintings are visceral and uncomfortable and are closely related to the psychoanalytical thinking of the time. They can be seen as reflecting Freud’s structural model of the psyche - with the reflected gaze of the super-ego moralising through the gaze on the desires of the id (the inner, instinctual self). Are we the ones moralising here?

Similar to many impressionist artists, Ayrton was particularly interested in mirrors and mazes. The use of the mirror in impressionist art was common, and we can see Ayrton uses the same technique in these etchings. The mirror provides a fractured or distorted perspective. In impressionist paintings, the reflective surface often revealed glimpses of hidden truths or the theatre of presentation. It challenged the viewers gaze as voyeur, looking in on scenes, often bars, brothels or theatres, in the melting pot of Fin de siècle Paris. They were images of social degeneracy being fuelled by the excitement of modernity. 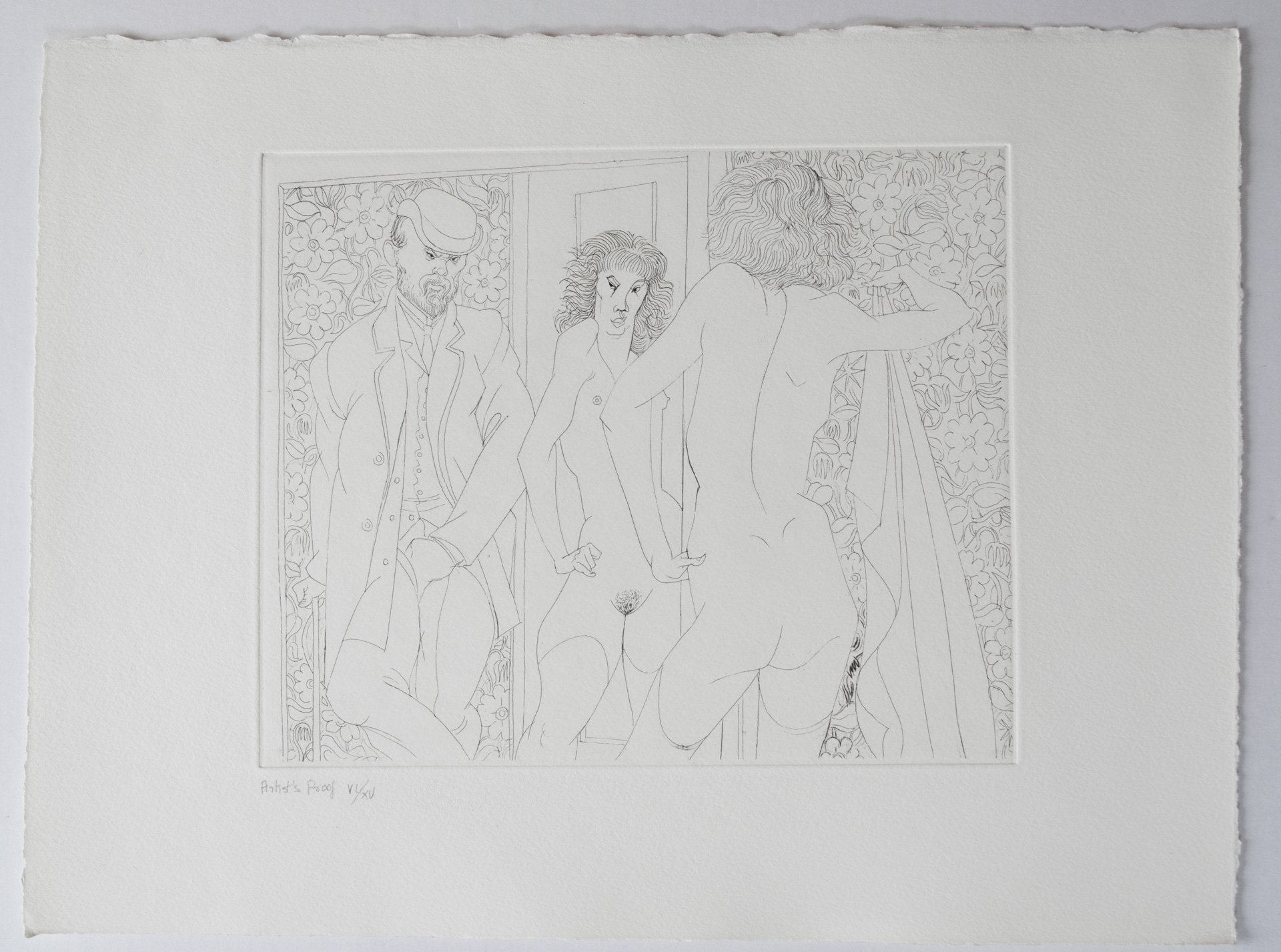 For example, in Un bar aux Folies Bergère, Manet places the viewer as a visiter to the Folies Bergère, engaging with the barmaid who is also a prostitute. This reflection of us, as purchasing commodities is a common theme in impressionist art. We can see this element of uncomfortable reflection in Ayrton’s etchings of Verlaine. 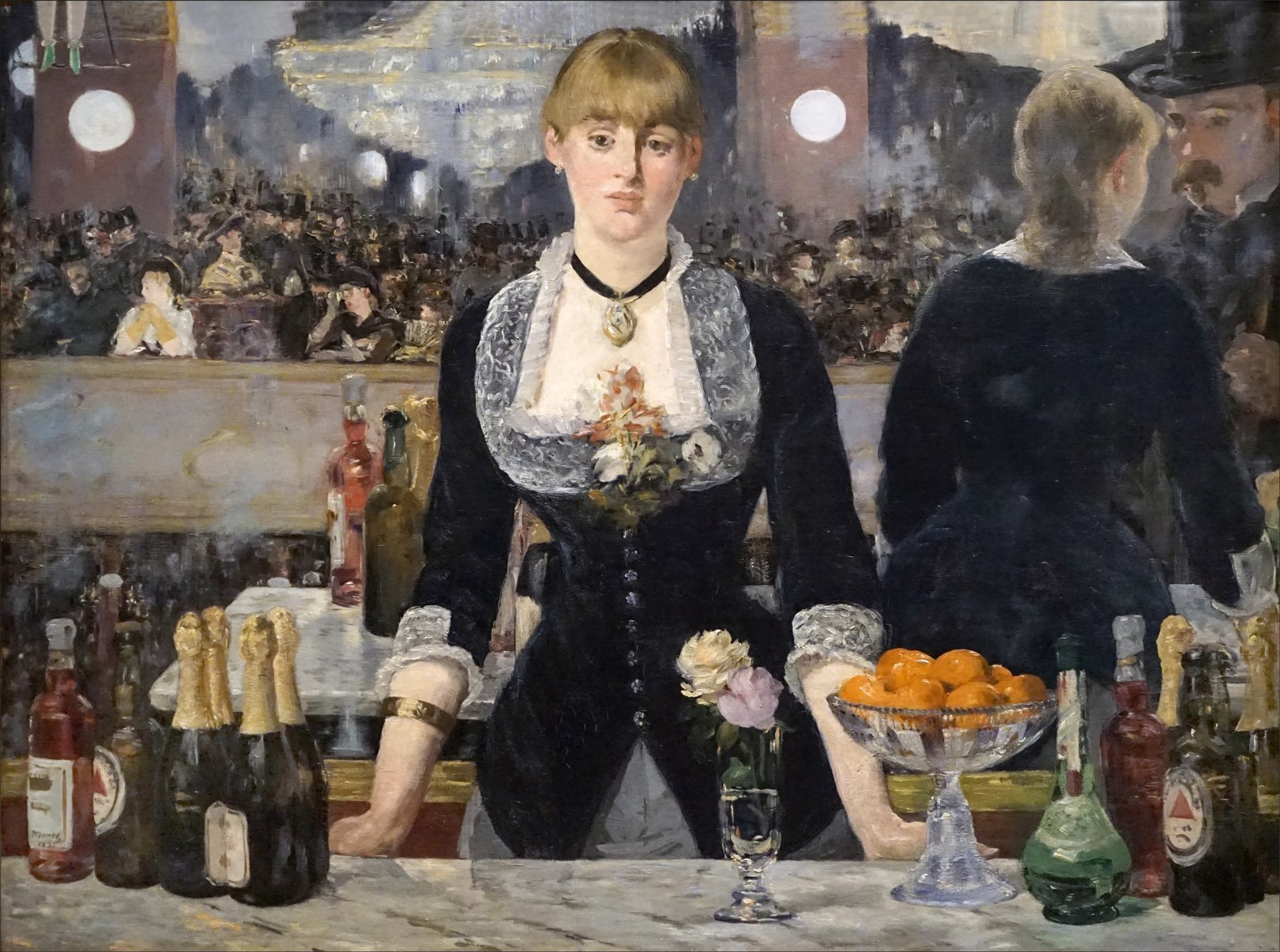 Much impressionist art explored a society (often shadowy) of the world the painters inhabited. They painted or wrote about the bars where they drank and it is the combination of the shabby glamour and decadence as a thin veneer over the underbelly of modern society. From university days, it was the glamour of midnight at the nightclub verses the reality of its sticky floor and tacky decor in the cold light of day. L’Absinthe by Degas is one of many examples where artists of the time highlighted the darker side of modern life. The drinkers, like Hogarth's gin drinkers before them, who try to forget the life they have and hope for oblivion at the bottom of the glass. You only have to look at a photograph of Verlaine to see a connection. 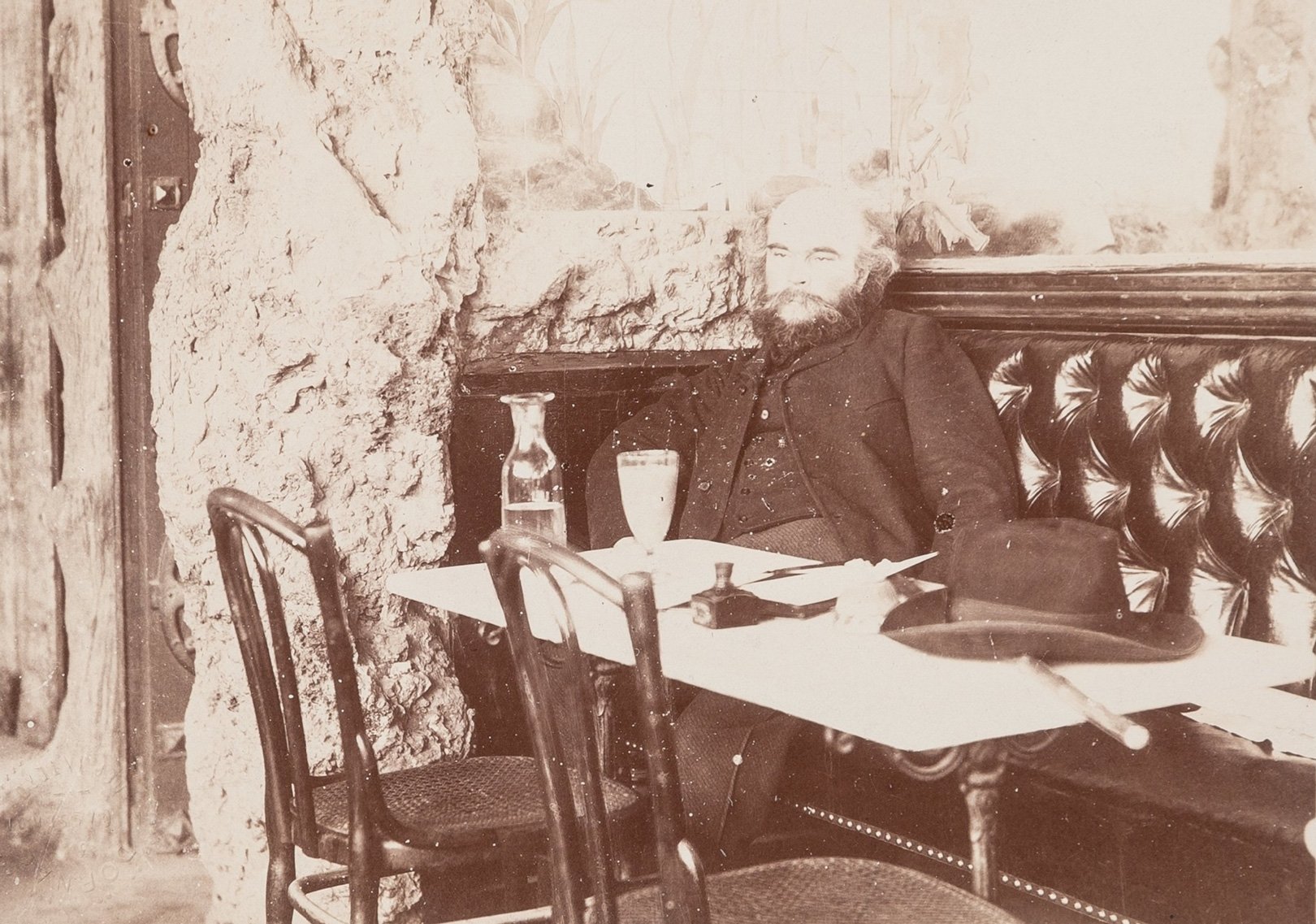 Impressionism isn’t the only artistic influence on Ayrton’s etchings. They also clearly reference Japanese Shunga Art (keeping in mind that Japanese art was hugely influential for the Impressionist painters). Shunga was a form Japanese art that celebrated sex acts. These sexually explicit images were usually woodblock prints. From the poses and the detailing of the feet and toes, to the stylised figures, Ayrton is clearly referencing this genre. They also conveniently cover the gambit of Verlaine’s attractions. Shunga Art was largely images of heterosexual encounters, but male/male imagery, and masturbation also featured. In Japanese art of this time, as in life, there was less association with any particular sexual preference, and all eventualities were catered for in Shunga - a perfect reference for a man of Verlaine’s tastes! 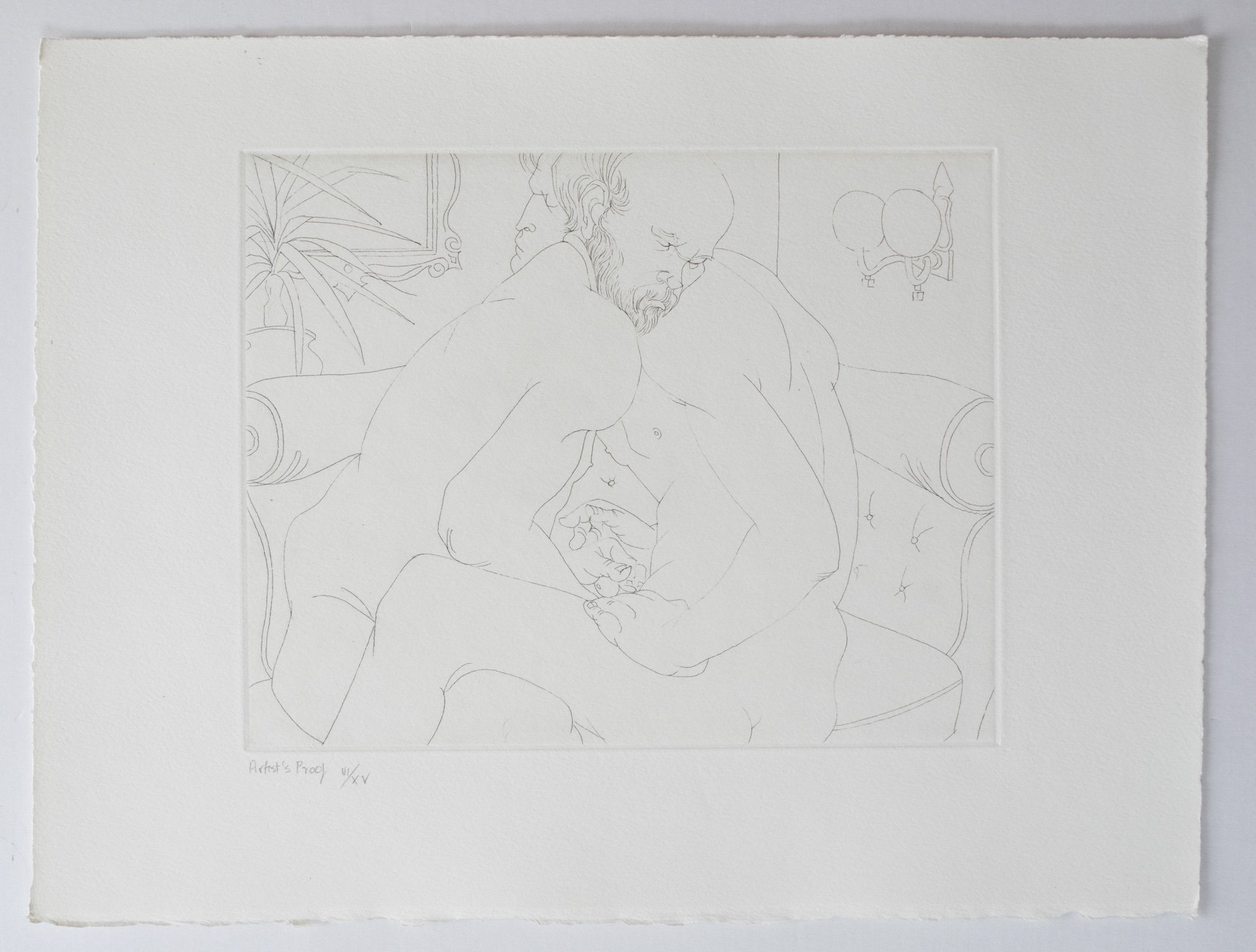 So, Ayrton’s etchings draw heavily on two major art traditions from the past. The content may be pornographic in places, but most of all, these etchings are beautifully drawn. They have the clarity of line you would find in a line drawing or etching by Picasso, such as this Neo-Classical Painter in his Studio etching from 1963, or The Kiss from 1967. The lines are simple and confident and brilliant, the subject is interesting and complex, the presentation challenging but engaging, entertaining and great to look at!

Read more about Michael Ayrton and see all the images from this series on his page in the online shop.