Sven Berlin (1911 - 1999) was, it is fair to say, a bit of a character. He became part of the established artist colony of St Ives, only to become disillusioned with it after the group fractured. He felt ostracised by the elitist and controlling group of modernist artists, and left Cornwall only to be later threatened with legal action by that same group after writing an unflattering ‘novel’ about the St. Ives and its inhabitants.

Berlin was born in London in 1911. As an adult after leaving school at an early age, he began his professional life as an adagio dancer (a form of acrobatic exhibition dance) and married his dance partner, Helga. Throughout his written work, Berlin speaks often of his physical strength in relation to his art work, and his resilience as an artist. It could be said that the entanglement of his artistic and physical self began here.

Sven Berlin and Helga moved to Penwith in West Cornwall. Here, Berlin continued his education, which had been cut short as a child, at Redruth and Camborne School of Art. He became a member of the St Ives artist community, and was a great admirer of the Naive artist Alfred Wallis, about whom he later wrote a biography. 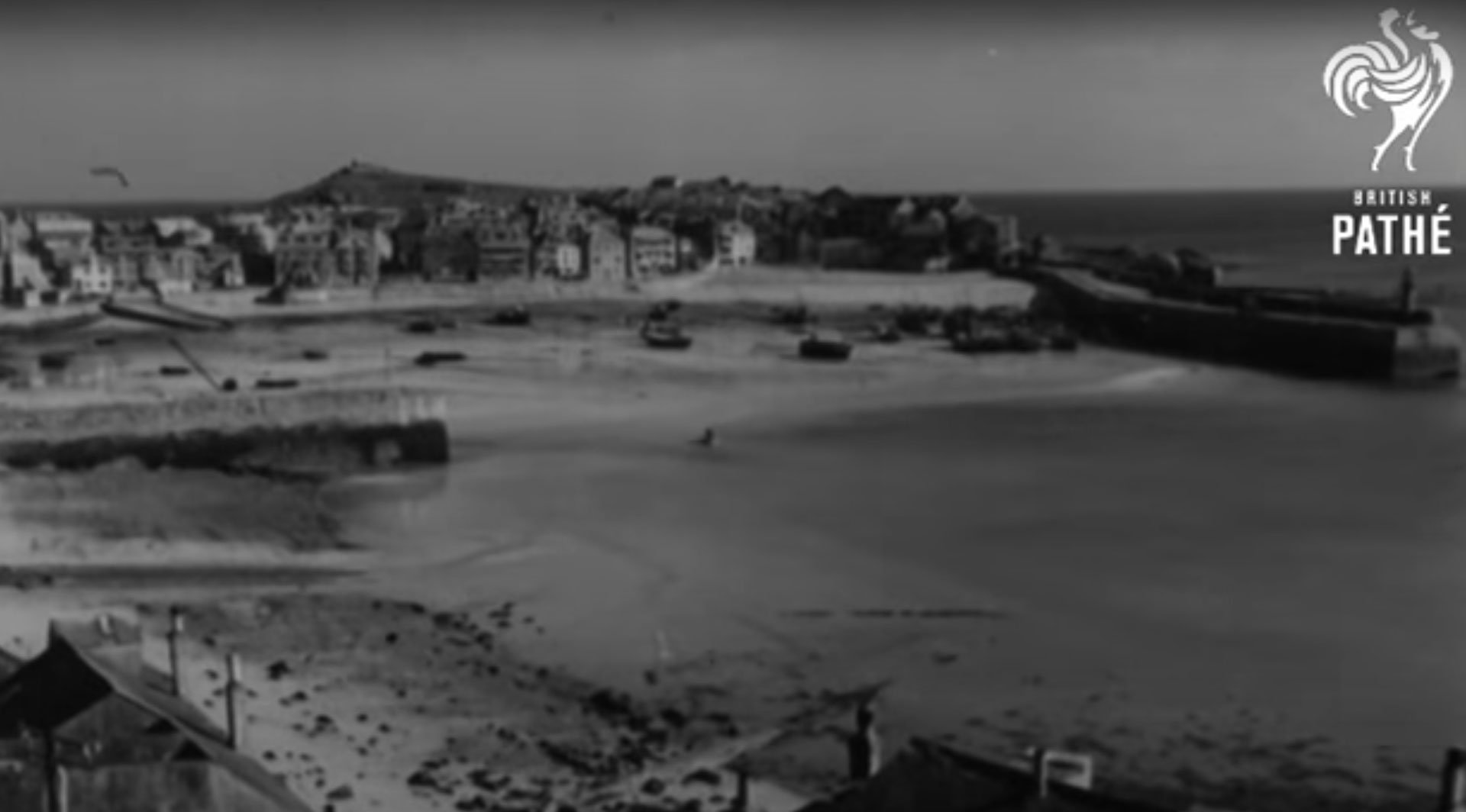 At the outbreak of war, Berlin asked to be placed on the Register of Conscientious Objectors due to his status as an artist. He was granted an exemption and sent to work on the land. Another example of extreme physical work that he refers back to in his writing. He worked at a pacifist commune in Ashburton, in Devon (which you can read more about in Gill Clarke’s book, Conflicting Views: Pacifist Artists*).

The pencil drawing below by Berlin of a Cornish Peasant from July 1938 evokes the harsh realities of life working the land in Cornwall. 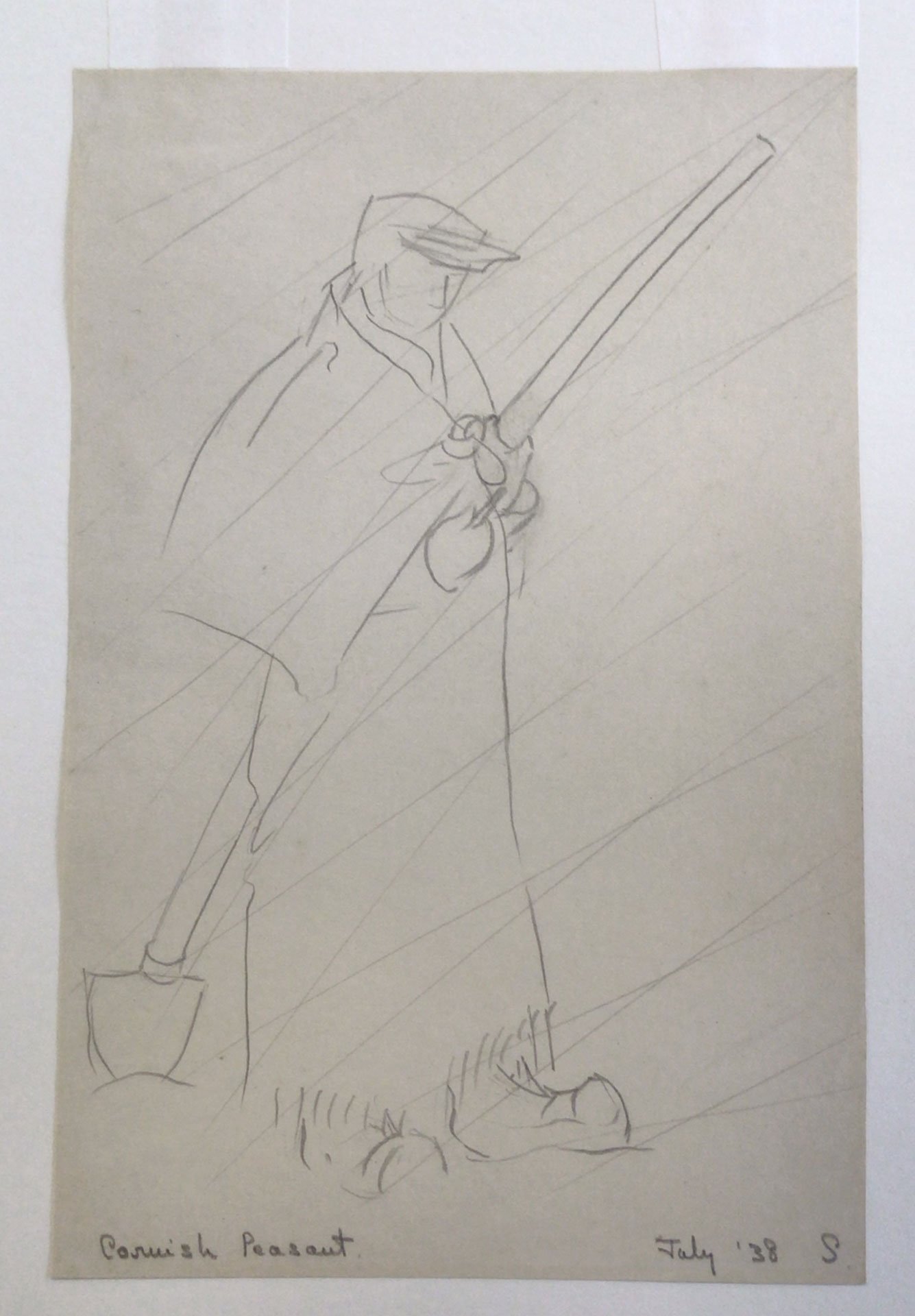 I was close to the Cornish. I had worked with them on the fields. Trenching a five- or six-acre field by hand with a Cornish spade for sowing potatoes, and leaving it like a billiard table at the end of the day, needed skill and stamina and a love for work which few will remember.

After witnessing a German attack on a British convoy, and hearing about the casualties in bombing raids on Plymouth, Berlin revoked his pacifist stance and, in 1942, enlisted. His account of his experience of war I am Lazarus, was published in 1961.

On his return to St Ives after the war, his marriage broke down, but his profile as an influential artist was secured as a member of the St Ives artistic community. He sculpted, drew and wrote prolifically, and fell in love with Jackie Moran ('Lilith' in The Dark Monarch). He eventually became disillusioned with the elitism of the set and left with his second wife in 1953 to live in the New Forest.

In 1962 Berlin’s book, The Dark Monarch, was first published. It was a thinly veiled ‘novel’ describing the characters of the St Ives Colony. The Dark Monarch was withdrawn from sale after only a few days, due to multiple threats of libel, and Berlin scarpered to the Isle of Wight shortly afterwards, with his third wife, Julia. They only returned in 1975, where they settled in rural Dorset (just outside Wimborne) and where they stayed until Berlins death in 1999. 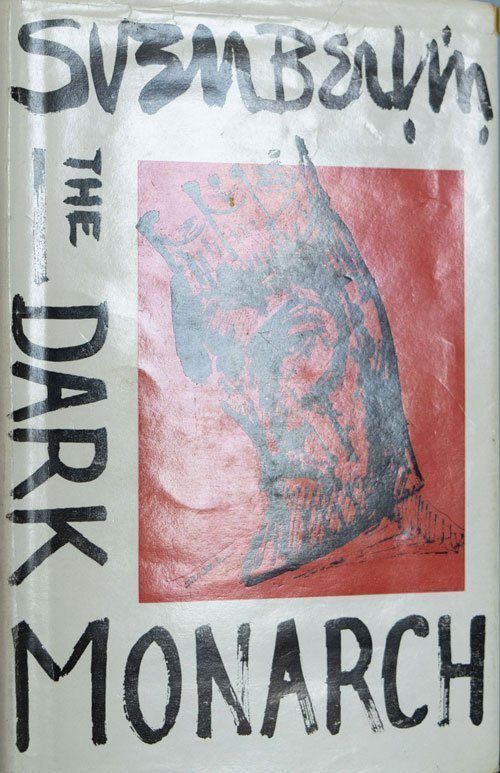 The Dark Monarch painted a very unflattering portrait of many members of the St Ives artist community, including Peter Lanyon, Barbara Hepworth and Ben Nicholson among others. It also described the fractioning of the group and resulting acrimony, between the ‘modernist’ artists and those more traditional, figurative, or amateur artists. It was an inflammatory piece of writing, and cast Berlin as an outsider to the art establishment. There are only a few surviving copies of the original publication of The Dark Monarch, as it was only available for a short period of time, before being withdrawn. We have a first edition copy available, although there was, after 50 years a second edition printed.

Since his death, there have been a number of retrospective exhibitions of Berlin’s work. These have been held in areas that he has called home at different times in his career. In 2009 there was an exhibition (titled The Dark Monarch) at the Tate, St Ives. In 2012, Penlee House Museum and Gallery, Penzance held a retrospective Sven Berlin: Out of the Shadows. Cornwall has reclaimed its exile.

There has also been a number of shows at the St. Barbe Museum and Art Gallery, Lymington, near to where Berlin lived during the 1960’s, which have focussed on some of his work based in the New Forest. Incidentally, the St. Barbe Gallery has a good-looking exhibition running until January 2022, which is ideal for a halloween treat - Unsettling Landscapes: The Art of the Eerie.

There has yet to be, as far as we know, a retrospective exhibition based in Dorset. Here at our Portland H.Q., we are making a tiny start today.

Berlin was a singular figure. Has any artist ever been the thorn in the side of so many other artists? Probably, but The Dark Monarch may change your perception of some household names from the modern British art world. Good gossip is the life blood of juicy art history research, but The Dark Monarch is a little more than just tittle tattle.

*Clarke, G. 2018 Conflicting Views: Pacifist Artists, Samson and Company. Published to coincide with an exhibition of the same name at The Otter Galley, Chichester, 2018.