I think that the current talk of the political ‘Circus’ is giving the history of the performer a very bad name. The human acrobat and the stage performer are both talented professionals, who have been celebrated in the most splendid ways throughout the history of art. Just think of Miss La La at the Cirque Fernando by Degas, dangling by her teeth from the roof of the tent, and now dangling in the National Gallery.

These perspectives, colours and feats of exuberant human abilities were things that Degas found fascinating. So too was the act of transformation that could be found behind the scenes at the theatres and circuses. Men and women became ‘other’; make-up and costume pushing these artistes beyond the everyday, and turning them into characters who could fly, mystify and transport the onlooker away from the everyday.

Along with many other artists at the turn of the century, Toulouse-Lautrec was also immersed in the theatrical life of Paris in the late 19th Century, where lines and light could be used to either define or blur an identity. Performance and performers created a sense of other self and other world, where colour and light both illuminated and disguised.

A generation later, Dame Laura Knight (1877-1970) was similarly drawn to the same themes of theatre and circus.  In 1908 Knight settled in Newlyn with her husband, the painter Harold Knight. They had met when they were both studying at the Nottingham school of art. Laura Knight became a key member of the St Ives School of painters.

She also spent time in London, visiting the theatres and circuses, and documenting the life both on stage and behind the scenes: The stage set, the glimpses behind the façade, the constructing of the performance. Knight recorded the dressing up and revealing of the theatrical processes. She was later interested in the gypsy and traveller communities as subjects for her paintings, but throughout the 1920s and 30s, the acrobats, performers and dancers on the stage were the regular stars of her work.

I have recently acquired this fantastic etching ‘Pantomime’ (1926) by Laura Knight. It is a soft ground etching – inscribed with the title and print details by the artist in the lower margin, but unsigned, as it is a process print. It is printed in black ink on laid paper, but despite the lack of colour, makes great use of light. 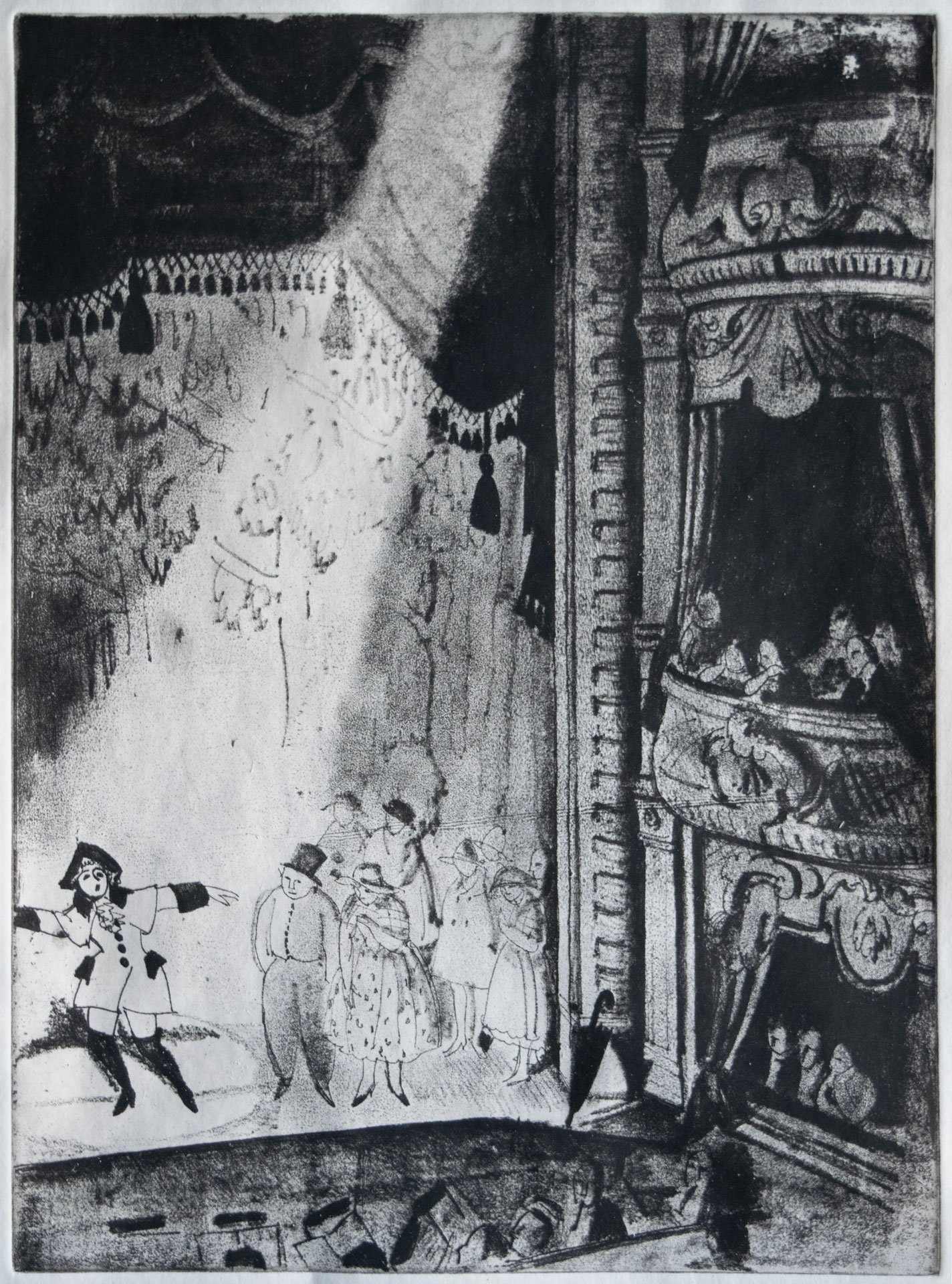 In the shadows of the theatre we can see glimpses of the audience, faces peeping out, lit up by the stage lighting. It is full, of people, life and cultural entertainment. The stage curtain hangs heavy above, and below, the orchestra busily accompanying the scene.

The character that looks like Dick Wittington is in the spotlight on stage. The story of Dick Wittington has been a favourite subject of British pantomime since the Victorian era, especially at Christmas, so is the perfect subject for a December blog post. I suppose I am offering this image up as an antidote to December 2020!

When an etching plate is prepared for printing, there are a few processes which will have an impact on the final look of the image. It is usual then, to create a few test prints before embarking on the full print run.

If a soft ground etching plate is polished, it will make the final image lighter, so an element of contrast will be lost. The artist will need to decide how pale he overall dark tones will be. In 'Pantomime', we have dramatic shadows and strong contrast in the light and dark.

The first run of an etching plate is the first state. It is the first time the artist has had the chance to view the image in its final form. At this point, the artist may choose to make alterations to change the final image. This may occur in several more stages, until the artist is happy with the final print. Then there is a print 'run' which creates the print edition.

Our little etching is marked as 'I' at the bottom right, and 1st Stage (or possibly stab!) in a soft charcoal pencil to the right of the title.

Knight is well-known for her pencil sketches of dances and performers, and for her series of etchings on the subject. I think these etchings have a sense of vibrancy and play which captures my imagination, but they also contain elements of the other narratives often explored in artworks on this subject - the reality behind the show: sex, physicality, sweat, tough lives, grease paint and hard work. Art historians often explore these elements in the work of impressionist and post-impressionist artists, but perhaps haven't credited Knight with similar insights.

The year after this little etching was created, in 1927, Knight was made an Associate of the Royal Academy. In 1929 she was created a Dame, and in 1936 became the first woman elected to full membership of the Royal Academy. Knight was also one of the leading lights of women as professional artists, producing a range of commercial design work, such as posters for London Transport.

Another female artist in the Art on Paper gallery, Anne Hickmott (b.1935), also produced posters for London Transport. Hickmott was one of the first wave (1945-75) of female British Modernist Graphic Designers. The ‘poster girls’ were a group of women commissioned to design posters to advertise events or attractions in and around the city. In recent years, these designers have been showcased in an exhibition at the London Transport Museum.

I think Hickmott is also a really talented printmaker. I love this picture (see below), of a troop of trapeze artists from the Moscow State Circus, swinging across a circus top hat. Again, the lights of the performance space bring fantastic drama to the scene. We can join the audience far below, part of the crowd craning our necks at the dare-devil display above.

This little blog post is a celebration of fabulous lady artists and the drama of the performing arts. I think that together, they make the perfect blend! 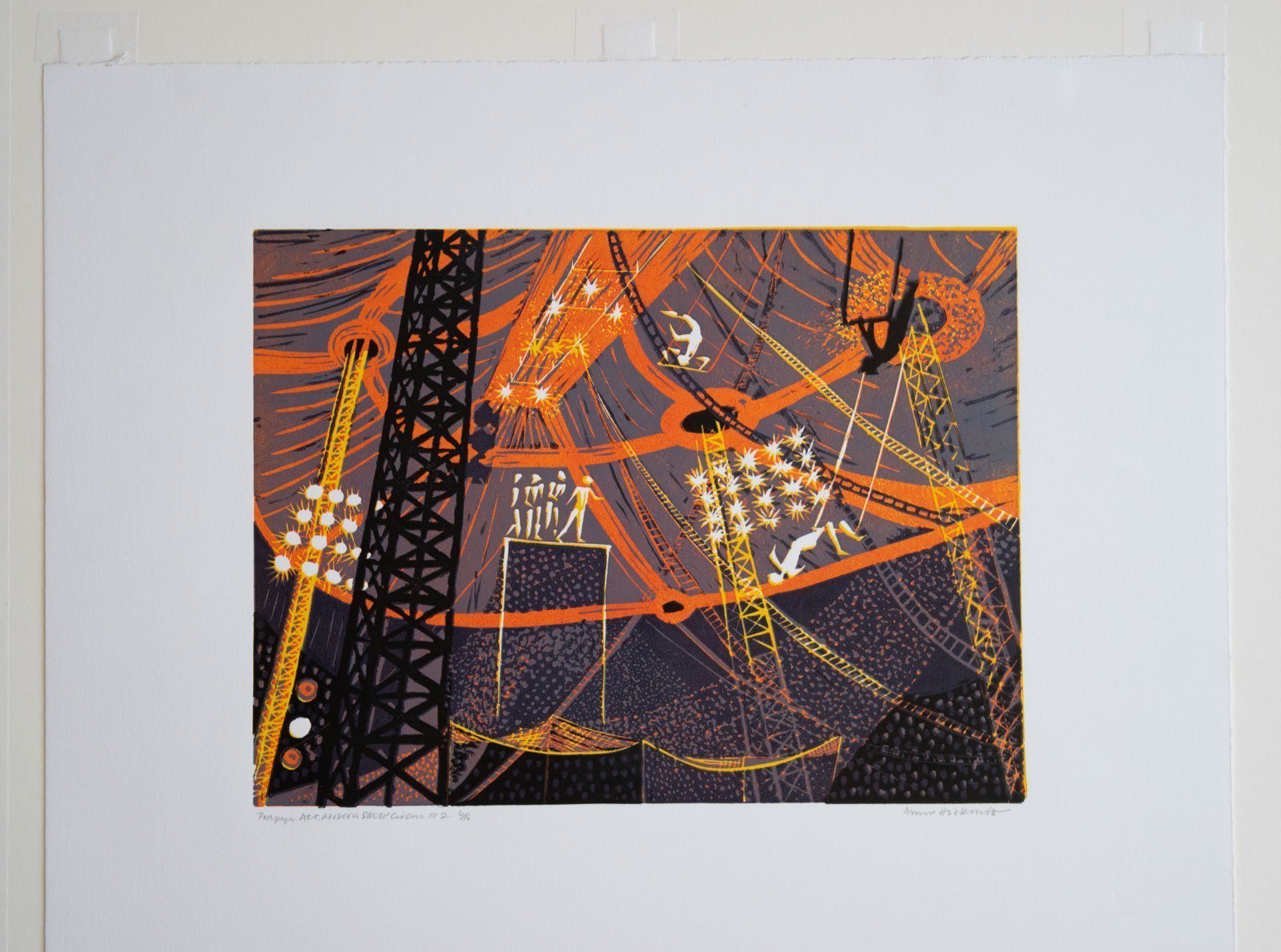 Pantomime, the Laura Knight etching, can be seen on pages 22-23 of the Fine Art Society book, Laura Knight: A Private Collection. A further reference is available on the National Gallery of Canada website.