Choosing frames for pictures is a difficult thing. Sometimes an unusual frame and picture combination creates a great ‘object’ where each plays well against the other. Other times, a frame needs to support the image. It is lots of fun trying out pictures and frames together. When you finally see a good pairing, it tends to leap out at you. It is not always the obvious choice.

I re-use frames, so have a store to choose from. I have either bought the frame or bought a picture that did not suit the frame it was in. But herein lies a tricky business. As any decent framer will tell you, sometimes the frame can tell as much about the picture as the picture itself.
In the past, collectors sometimes had a house framing style. You could tell if a picture had once belonged to this collector or that, by its frame. Sometimes a picture was conceived with a particular frame in mind, and thus the two become a single ‘unit’ of artistic creativity. Some artists made the frames for their pictures to go in. At the turn of the century the framing of pictures became as ‘modern’ and ground breaking as the artistic styles. Famously the arts and craft movement embodied this designing of frame and art. Whistler even signed some of his frames with his butterfly motif.

The style and construction of a frame can tell much about the history of the picture inside it. Similarly, the frame labels on the rear can tell an art historian much about the provenance of a work of art. It can help tell the story of a pictures journey. Where had it been? Through whose hands had it passed? Where had it been exhibited? There is a lot to consider when conserving a work of art, including how it is presented. It is worth considering these issues even if you are not dealing with an old or modern masterpiece.

Sometimes, you can have free rein. The artwork is sold without a frame, or has been cobbled into something unsuitable. Then I often choose to be a bit playful in my framing choices if I can. Old frame with newer art or a HUGE frame for tiny a picture. 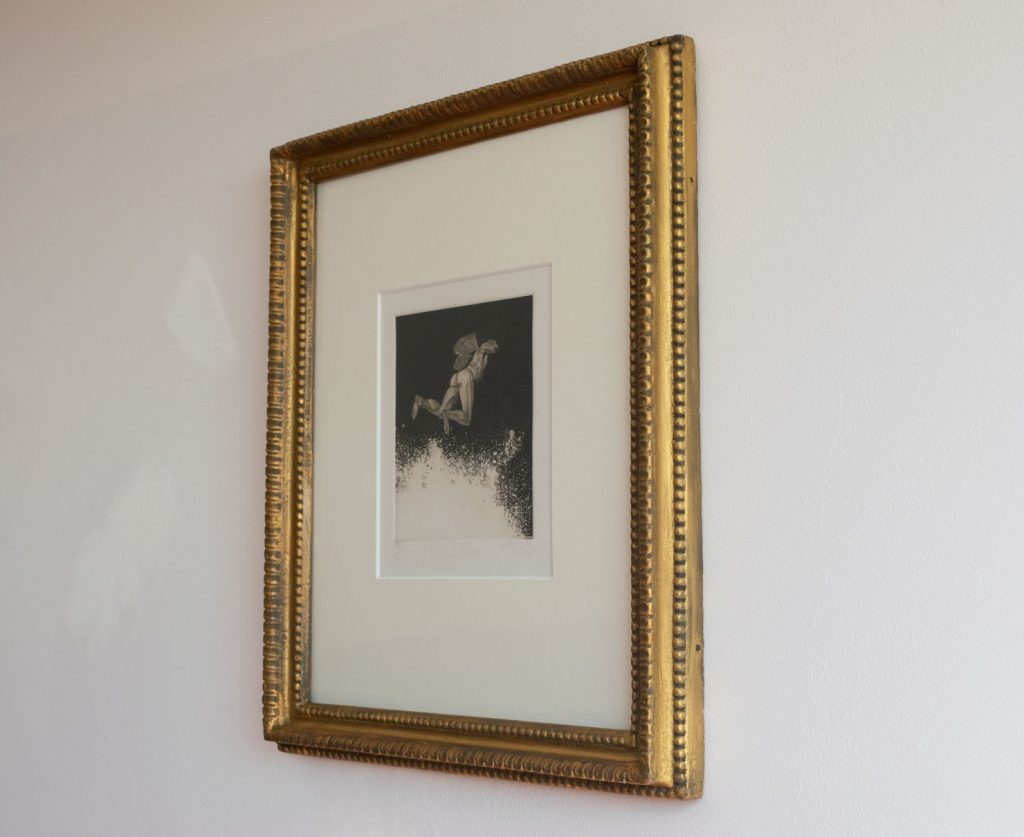 The Flight of Icarus: a modern print in an antique frame. 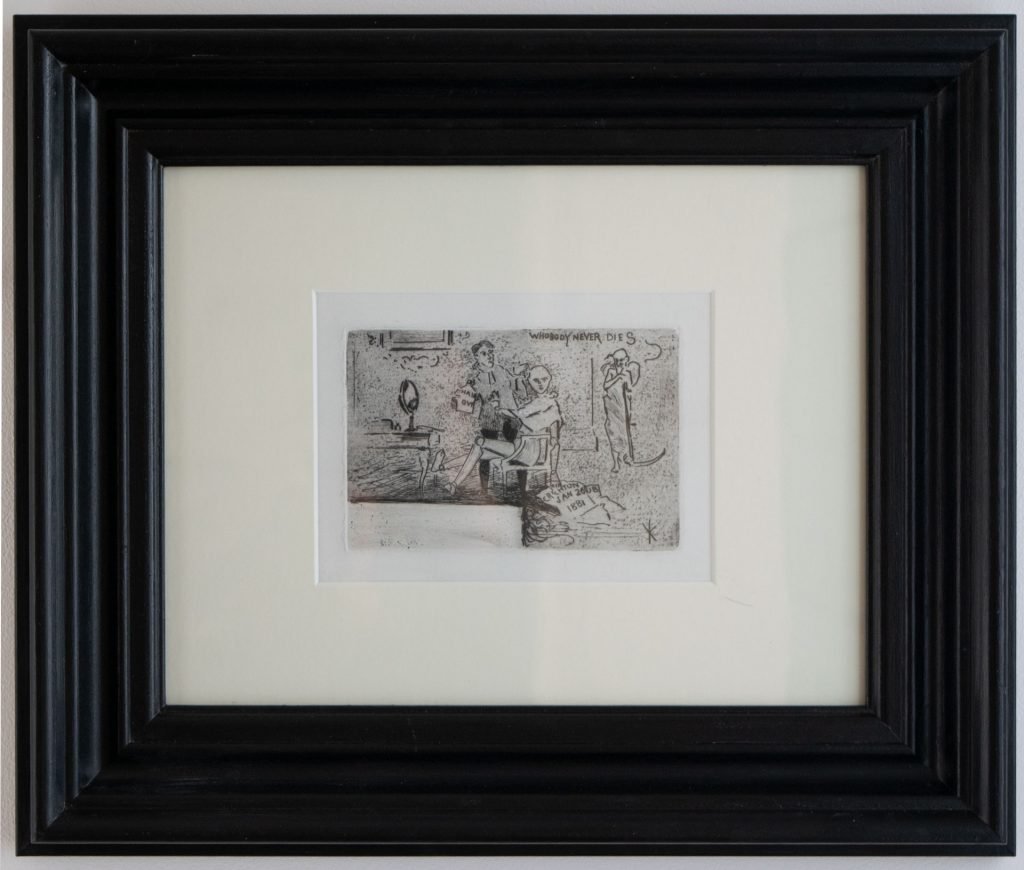 Sometimes a piece of art arrives with an original frame, or at least one that has formed part of it’s journey, that it would be a shame to dismiss, or lose. But this can have consequences for choices relating to conservation.

I recently came across the linocut Nurse, 1971, TJ Draper. I have no idea who TJ Draper is, but I absolutely loved the quality of this image. It is striking, stylish and pertinent to this moment in history. It was in it’s original frame, which was a classic method of framing in the 70’s. Steel brackets that clamp the glass to a wooden under-frame with screws at the side, with a wooden backing board. She was in a dark grey window mount, not of a conservation standard, and that had acid discolouration to the cut edge. 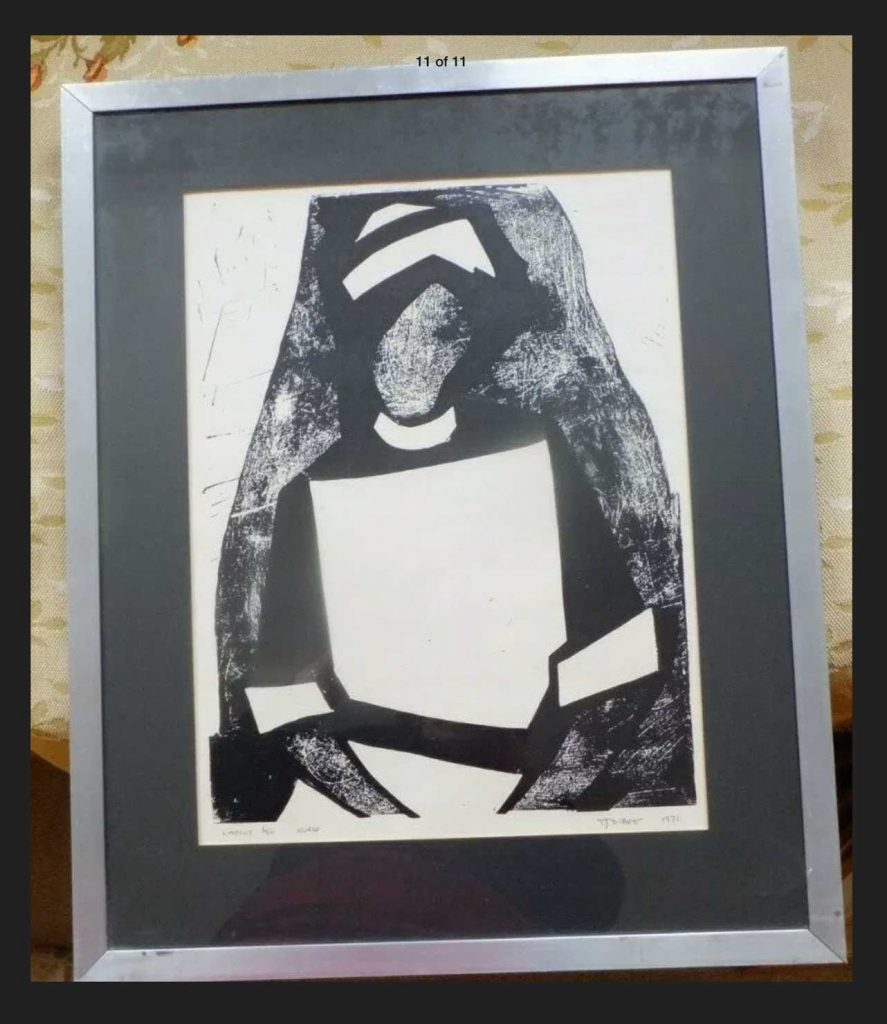 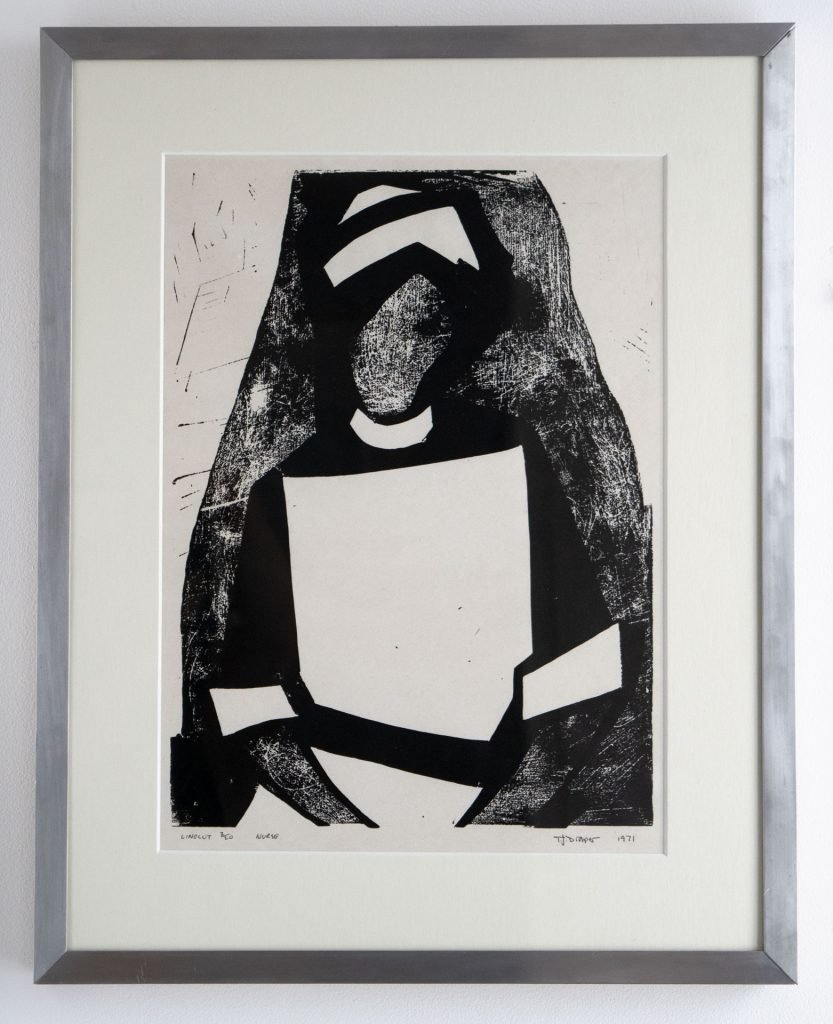 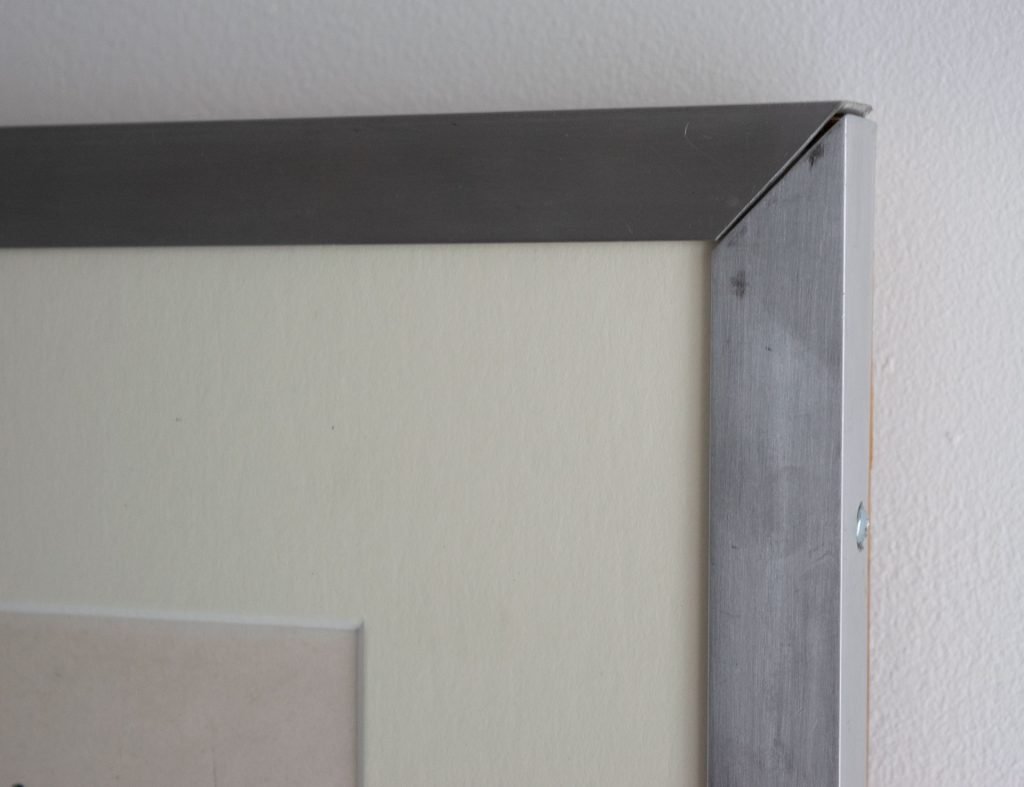 Nurse: Not a perfect join 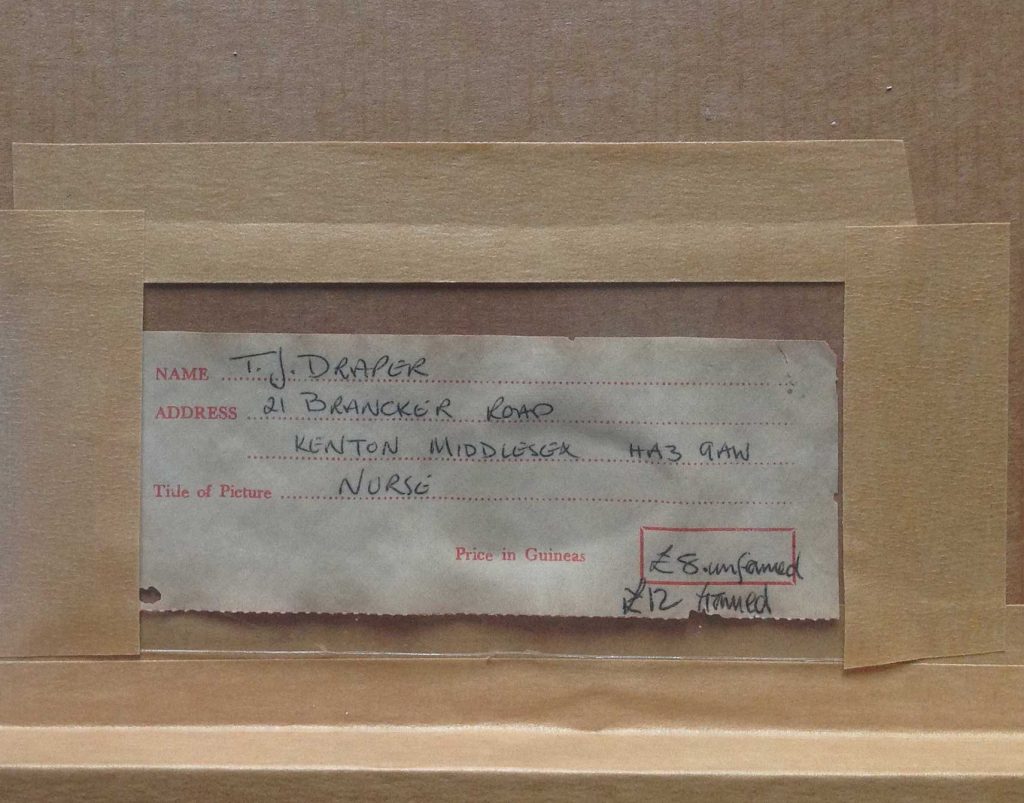 This type of frame is not strictly of conservation standard, as there are gaps at the corners of the frame that can let in moisture, air, or bugs, and the materials used were not good for the picture itself. But, it did look great. It was of it’s time, and when I dismantled the frame I could see that it had been hand made for this particular image (the metal brackets were marked inside with N-T, N-R etc. for ‘nurse top’ and ‘nurse right’). The wood for the under frame had been cut, a bit wonkily, by hand. There's a chance that it was made by the artist.

I re-glued the wooden frame, and polished up the steel brackets. Then I cleaned the picture an re-mounted it in a conservation standard mount board. The colour of this is antique white. It allows the image to be updated (or look less ‘dated’ in the negative sense) without it losing a sense of its time. I cleaned the glass, and reconstructed the frame. Instead of replacing the wooden backing board, I inserted conservation standard backing board to seal the back of the picture. The corners are still a weak spot in the protection of the picture in the future, but I think it was a good compromise. I also made sure that I removed the original label from the wooden backing board, and attached it to the new backing. This makes sure that the ‘story’ of the picture is not broken. I am happy with the result.

I also recently worked on a pencil sketch by Karl Weschke, Dancer Fastening Shoe II, which arrived in its original frame. The frame was not of the same era as the sketch, but it had a label from the framer and from the Redfern Gallery on the backing board. This frame had been chosen by Karl Weschke, and as with the Nurse print, it was decided that the drawing should be reframed in its original frame. When I took the sketch out of the original frame, we found another sketch verso, that had been written on, an upside down ‘No.7’ indicating that the sketch on the other side had been chosen as number 7 for the exhibition. I photographed this verso sketch, and attached Japanese paper tabs using wheat starch paste so that I could window mount the drawing. 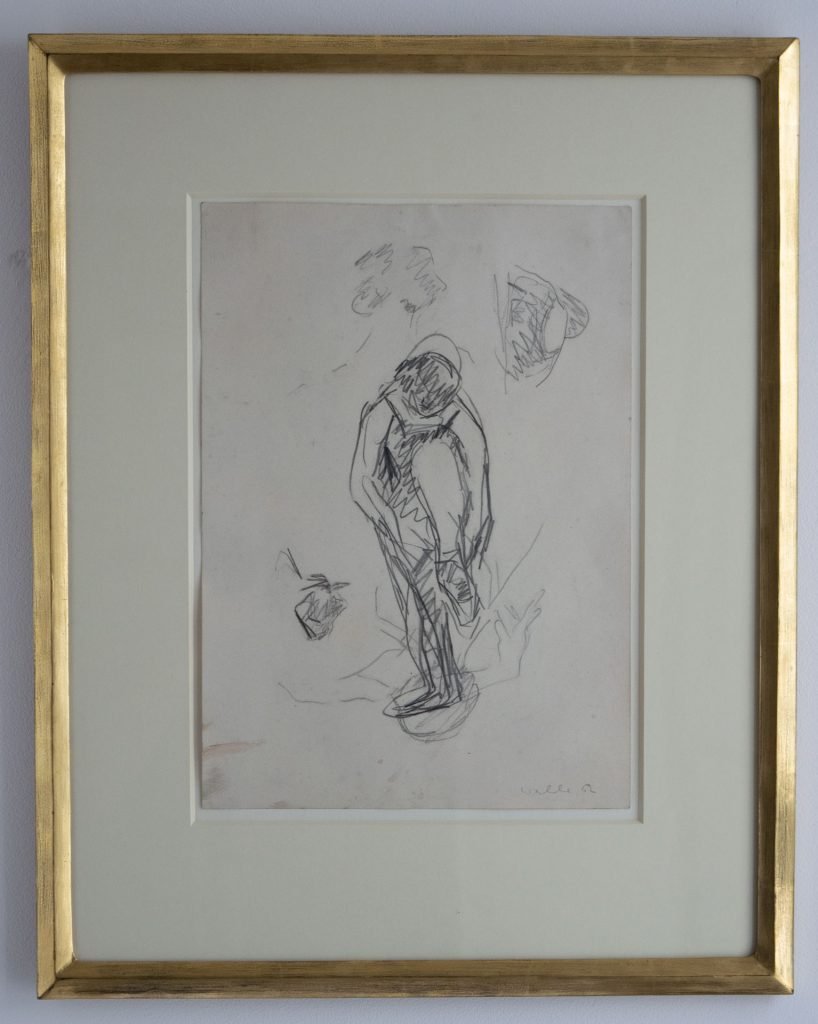 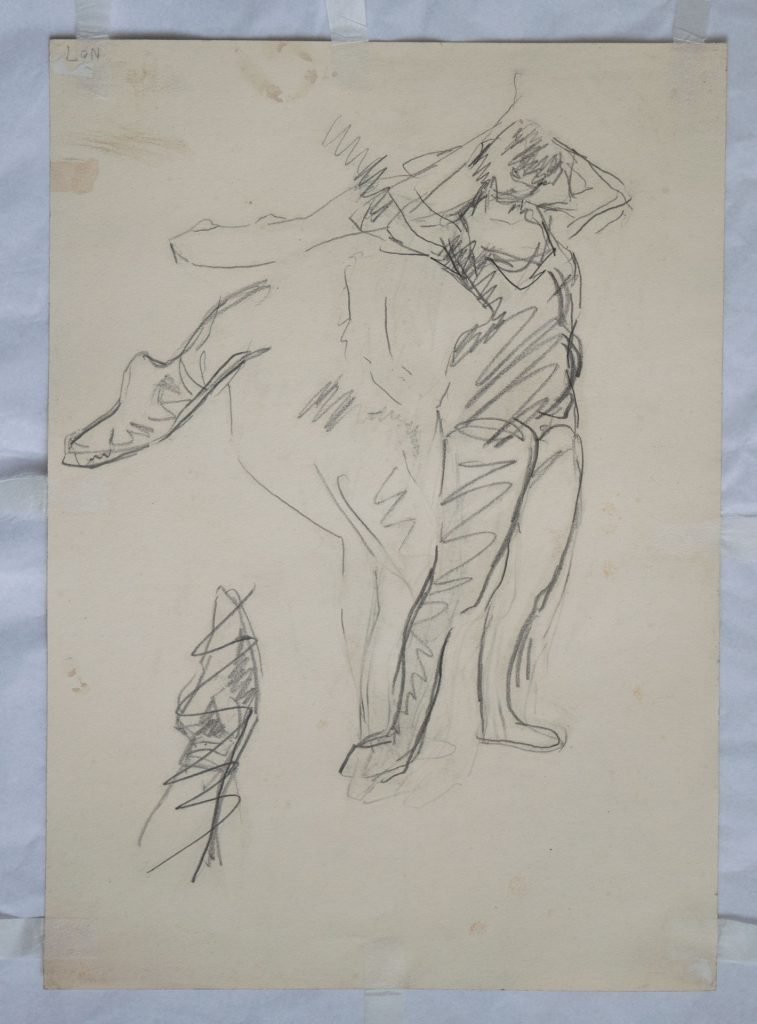 Dancer fastening shoe II: The reverse of the drawing shown at the Redfern Gallery

I cleaned the drawing, and slot – mounted it to a new piece of conservation standard mount board. I retained the original deep window mount (as it did not touch the paper edge of the drawing). I could then clean the glass, and touch up the frame, and reframe the picture, replacing the poor quality backing board with something of conservation standard. I removed the original exhibition label and framing label, to keep with the picture, as provenance. The dancer is now reframed and looks as she would have for exhibition in the 1990’s. The changes made to the quality of the backing and mounting materials, will mean she is good health for many more years.
Framing choices are a personal thing, but I hope you have enjoyed reading about some of my decisions.

For those of you interested in finding out more about the history of frames, The Frame Blog is an online magazine on the subject, written by a whole host of experts in the field.

The best way to read about our latest offerings and other interesting things! Press the button below.