The etching aquatints illustrating Chaucer's 'Canterbury Tales' are from one of 175 unbound sets signed by the artist from 1972. The edition was of 275 + 25 Hors de Commerce, of which 175 were produced in the unbound edition we have for sale.

The etchings are unsigned individually, though there is a signature for the set (photo below). They are printed on J. Barcham Green wove paper. Printed by Cliff White at White Ink, London. Published by Leslie Waddington Prints Ltd.

Each piece of paper includes an excerpt of text and we are supplying these etchings framed. When framing the etchings, we decided to mount out the text. The etchings looked better without the distraction of the text, once they were in a frame. 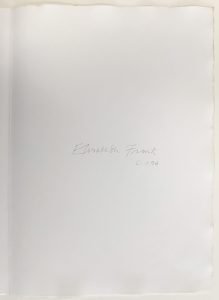 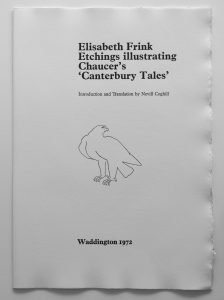 Dame Elisabeth Frink, R.A. (1930-1993) was an artist I was familiar with growing up and I'm very pleased that we have a set of her etchings, which are listed below.

There was a solo exhibition of Frink's work in 1987 on Portland, home to our H.Q. The exhibition was held at the Chesil Gallery (no longer a Gallery), although I was a little bit young to be traveling unattended back then!

Frink was born in Suffolk in 1930. In 1945 she visited Venice, which inspired her interest in arts and culture, and began her studies at the Guildford School of Art the following year, where she specialised in Sculpture.

The Tate bought a sculpture from her first exhibition at the Beaux Arts Gallery with John Harvey and Michael Werner, which helped make her one of the youngest and most successful sculptors in post-war Britain. Despite (or maybe because of) this early success, Frink did not find much favour with the critics, although remained hugely popular with the public.

Frink taught at art schools throughout the 50’s, but left teaching in the 1960’s, moving to France in 1967 where she created her Goggle Heads. She was occupied by the human condition, grappling as with many contemporaries in Europe at the time, with the consequence and realities of war.

Frink lived and worked at Woolland, Dorset from 1977 up until her death aged 63 in 1993. The grounds of the Woodland Estate were dotted with sculptures. The estate was inherited by her son, Lin Jammet. On his death, he gifted the Frink estate to the people. Her archive of documents, material objects and works on paper is held by the Dorset History Centre, in Dorchester. They are part way through cataloging the archive, assisted by the former curator of the Frink Estate, Annette Ratuszniak. I am looking forward to being able to carry out further research there in the future.