The story of Psyche and Eros is based on a greek myth and has been the subject of artists since antiquity. Psyche, the most beautiful of three sisters, is adored by admirers making Venus jealous. Venus sends Cupid (Eros) to shoot her with an arrow which will make her fall in love with a monster. Instead, he pricks himself on the arrow, and falls in love with Psyche.

Worried about his daughter, her father consults the Oracle of Apollo, who says that his son-in-law will not be human, but a serpent monster. Psyche is sent to the top of a rocky crag, where the west wind (Zephr) carries her to her fate. She lands in a paradise, where Eros, under cover of darkness and the night, seduces her.

Psyche becomes pregnant by the mysterious visitor. Her sisters visit and are jealous of her worldly splendour, and convince her to unmask her seducer – surely the evil serpent envisioned by the Oracle? One night, she lights a lamp and takes a dagger to kill this monster, but instead beholds the beauty of Eros. He wakes with a drop of hot oil from her lamp and leaves her on the bank of a river. On the bank of the river she meets Pan, embracing Echo, and wanders the earth in search of her love. Her jealous sisters jump from the rocky crag to be carried by Zepher as a replacement for Psyche, but instead fall to their deaths.

Finding herself at the temple of Dementer, Psyche sweeps the temple clean, but can receive no help from Demeter in her displeasing of Venus. Venus is cruel to Psyche, who is helped by insects and gods to perform the impossible tasks set for her. Eros is under the same roof, suffering.

The final task set by Venus, is for Psyche to get a piece of Proserpina’s beauty (queen of the underworld) to remedy Venus’s faded looks. Psyche receives advice to help her. She must carry two cakes to distract the threeheaded watchdog, Cerberus and two coins in her mouth, with which to pay the ferryman to cross the river stix. Proserpina gives her a box containing her beauty, which once back from the underworld, Psyche looks at. The contents of the box send her into a deep sleep.

Eros, recovered from his wound from the hot oil, discovers Psyche and returns with her and the box to Venus. Zeus agrees to their marriage, and gives Psyche an elixir of immortality. They celebrate with a great banquet, and their child is named Pleasure.

In 1994, Alison de Vere 1927 –2001 made an animated film of Psyche and Eros for Channel 4. Her Psyche and Eros was based on drawings by Karl Weschke (who de Vere married in 1948 but later divorced). They remained close.

We have a number of the original pencil drawings by Weschke in our online shop, which formed the basis of the characters for the animation.

Weschkes' characters are clearly identifiable in the film.

Below is a still from the film and the pencil drawing by Weschke, portraying Pan embracing Echo on the banks of a river. 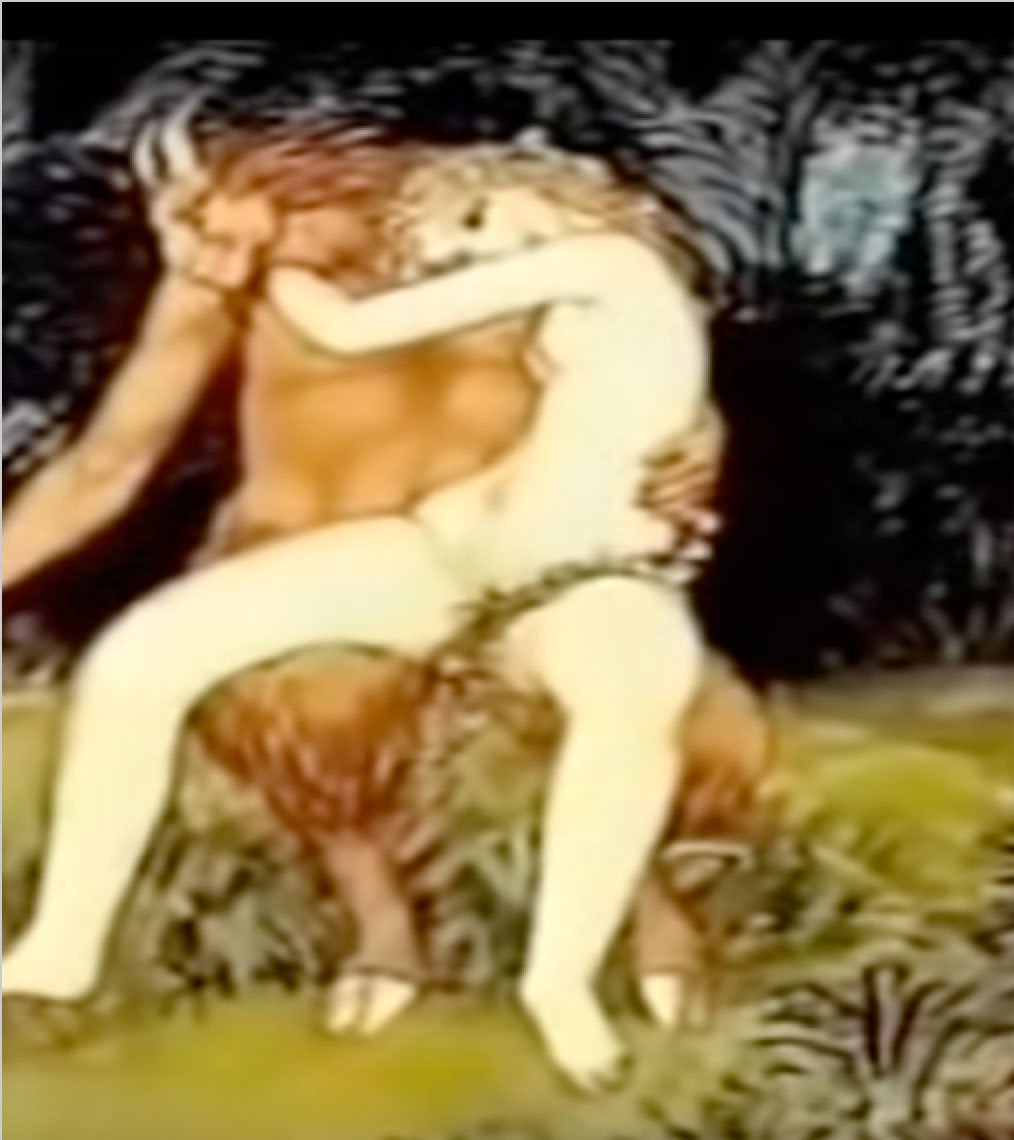 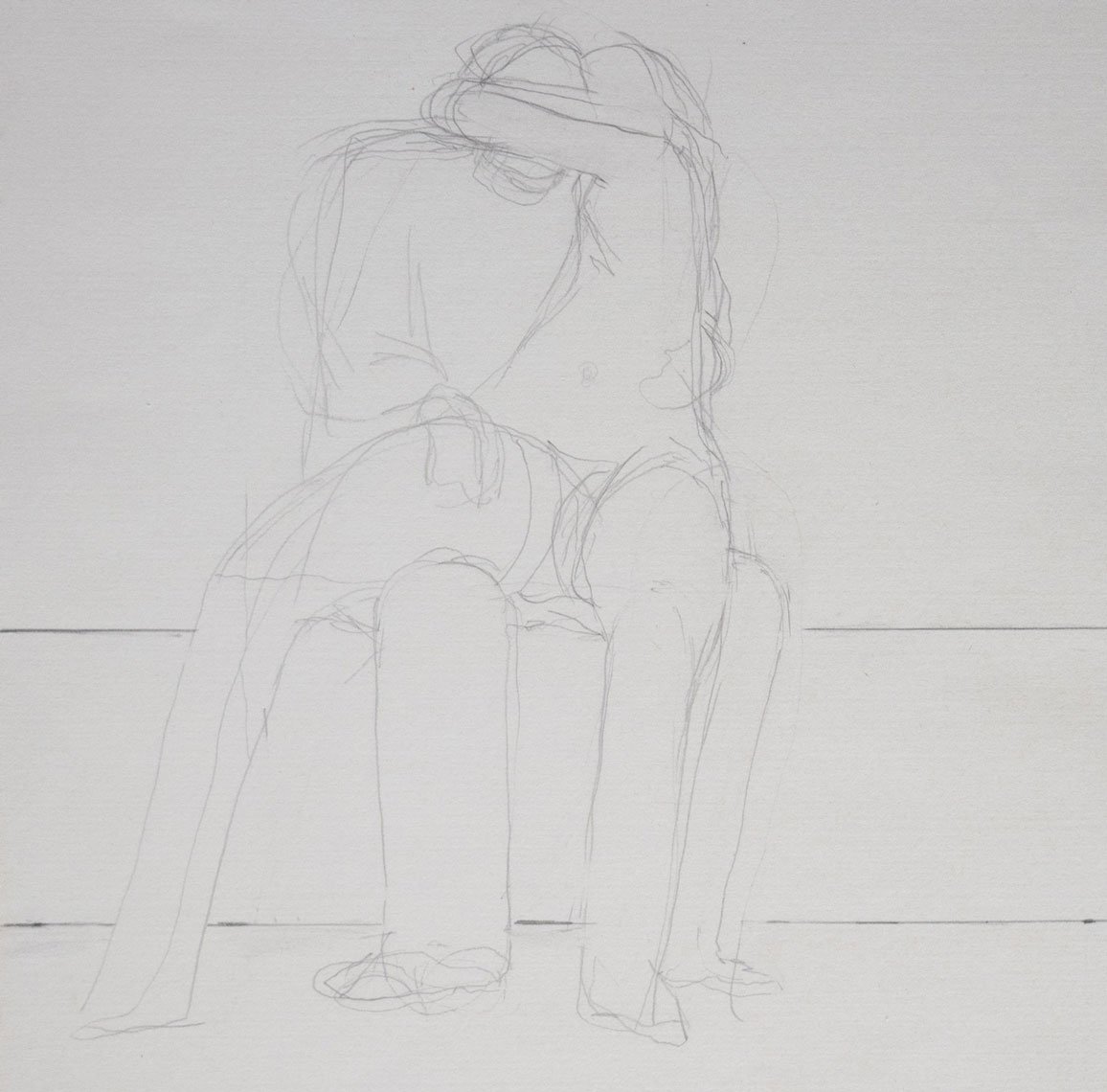 Here is a still from the film and a pencil study of a theme that Weschke returned to many times, and is clearly a figure study for Psyche bathing in the film. 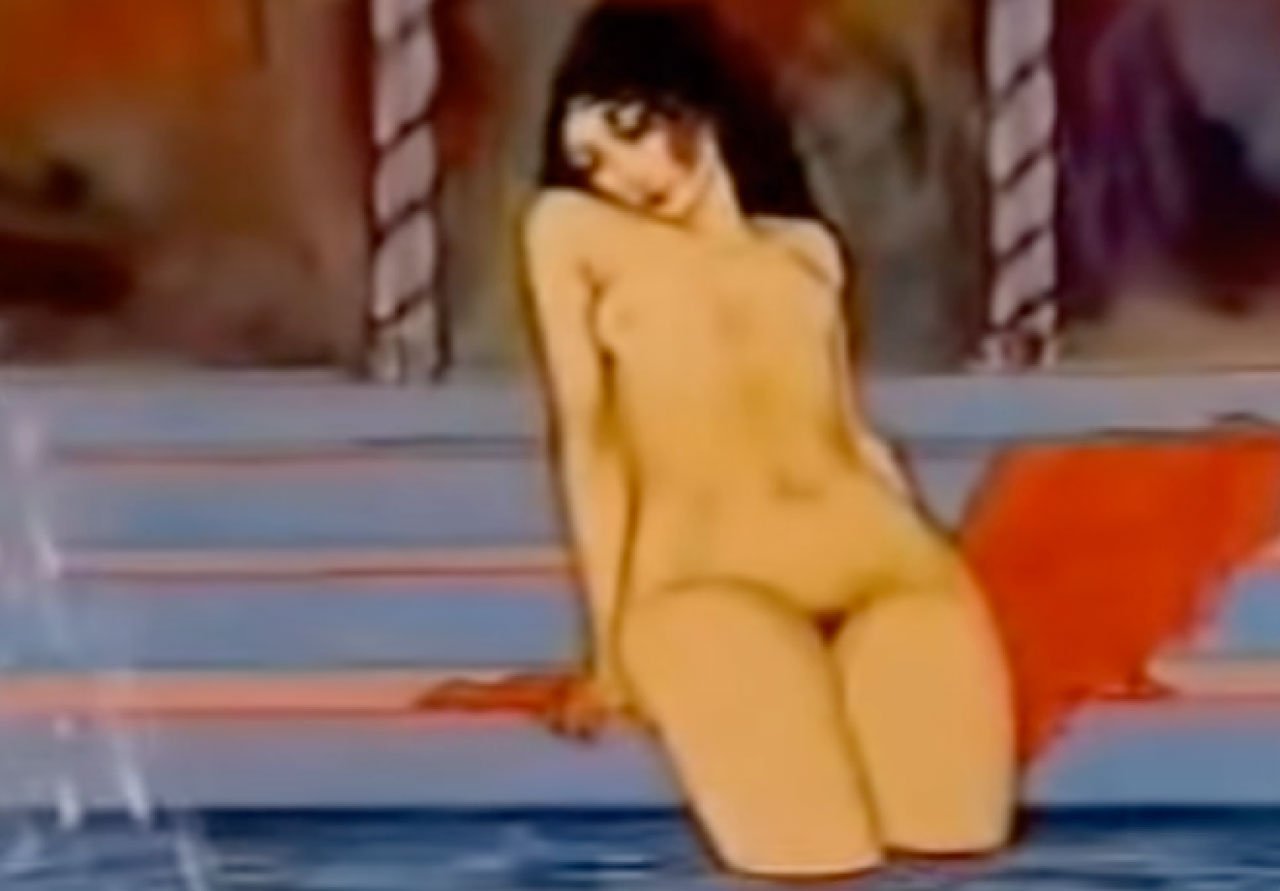 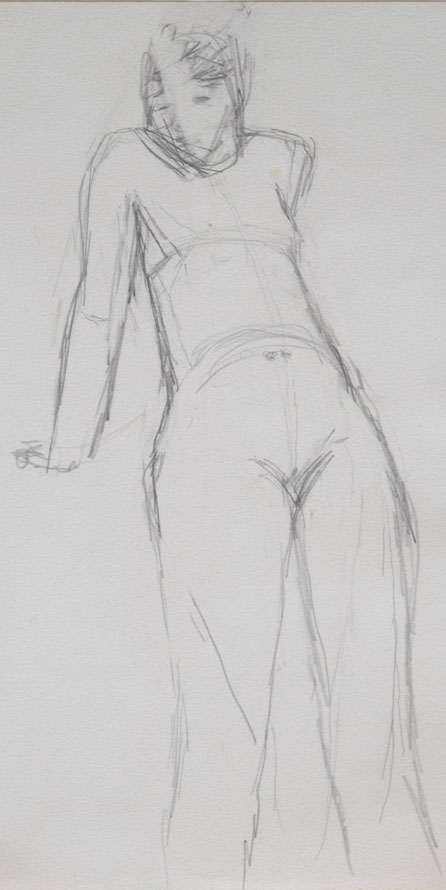 Finally, the following figure study in pencil and red crayon is likely to be a study for the statue of the goddess Dementer. 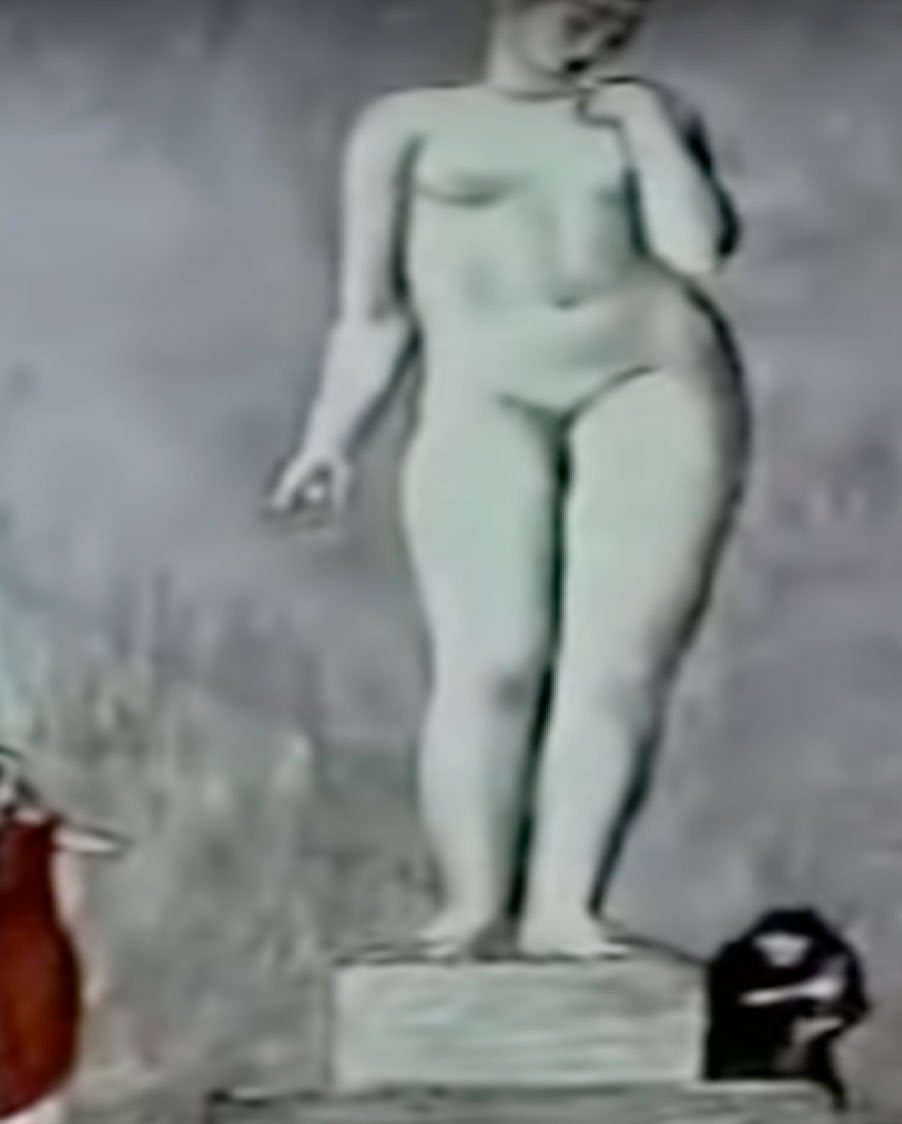 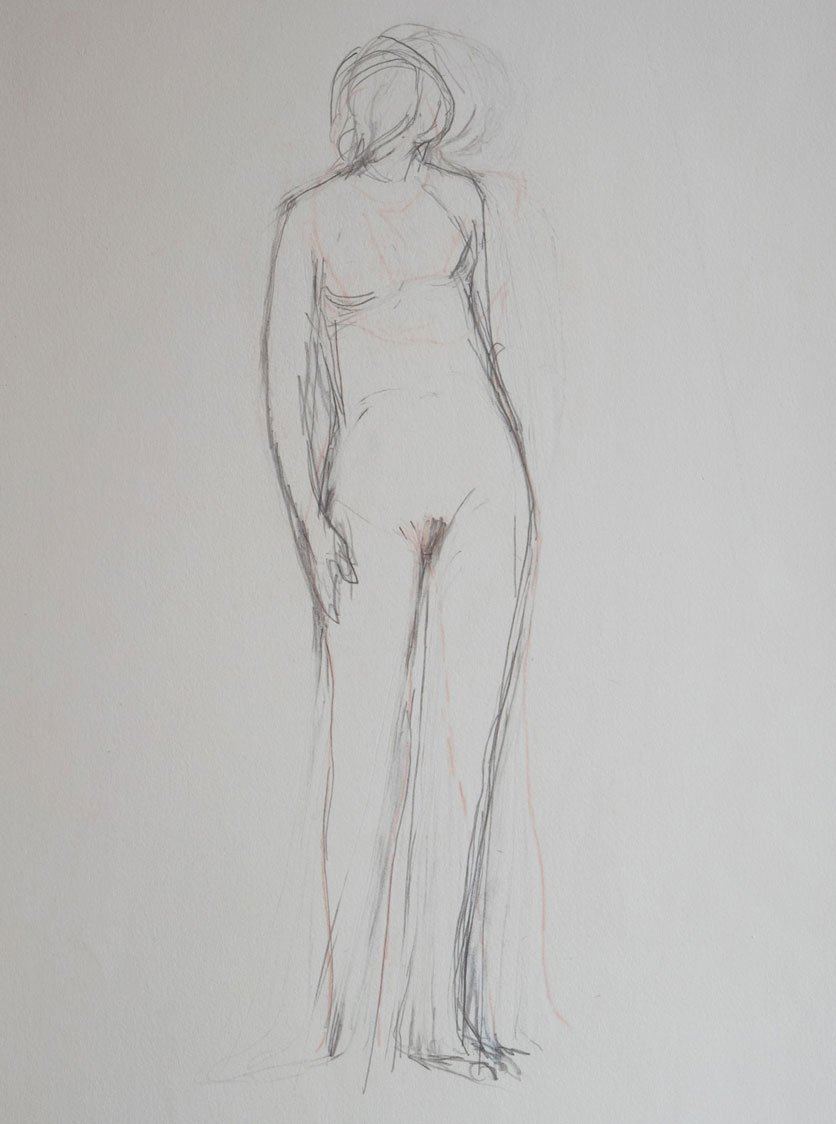 We have other drawings and prints by Karl Weschke, which will be added to the website as they are conserved and framed. Keep an eye open or join our mail list (bottom of the page) and we'll let you know each month, which new artworks have been listed.